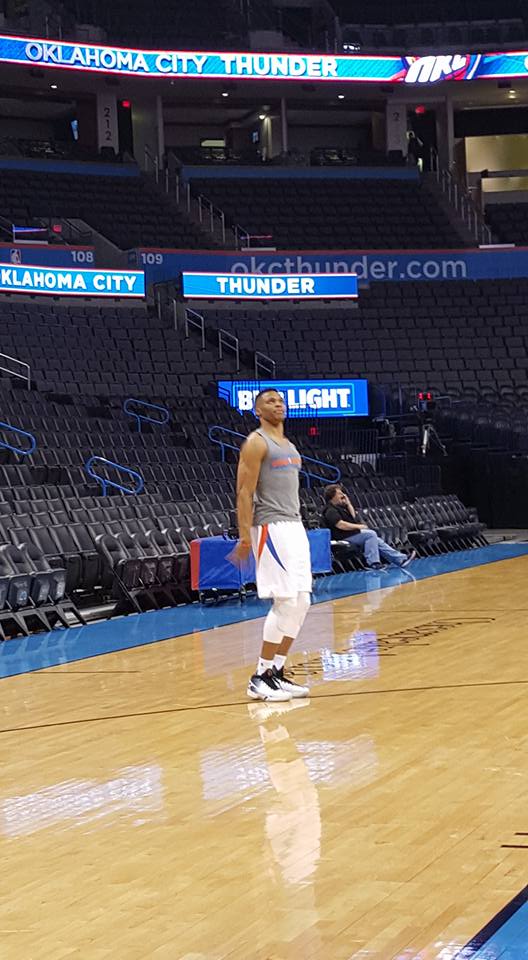 OKLAHOMA CITY – The game was on the schedule so it had to be played. But there was very little either the Oklahoma City Thunder or San Antonio Spurs got out of their Saturday night matchup at the Chesapeake Energy Arena.

Playing a Spurs team missing its five best players, the Thunder won 111-92 in a disjointed and low-energy contest. That is except for Russell Westbrook, who was in attack mode much of the night

“We were just playing our game,” Russell Westbrook said. “Defensively, I thought we did a great job defensively for 48 minutes and we came away with the win.”

Westbrook posted 29 points, 8 assists and 6 rebounds. Kevin Durant led all scorers with 31 points on 13 of 20 shooting. It was his 58th consecutive game in which he has scored at least 20 points. He also collected 10 rebounds and five turnovers. Serge Ibaka added 15 points and eight boards.

“Another opportunity to keep growing and improve on our habits,” Durant said. “It wasn’t on us that they didn’t play their starters, so we just have to continue to play our game and stick to what we do.”

San Antonio was without Kawhi Leonard, LaMarcus Aldridge, Tim Duncan, Tony Parker and Manu Ginobli. That left David West and Kevin Martin to lead the Spurs with 17 points each.

“Well, you know in the NBA. They did what they were supposed to do in the end they kicked our butt,” Spurs coach Gregg Popovich said. “We hung in there really well, and did a good job. You learn from everything whether you win, lose, it doesn’t matter. We had a lot of young guys get some time and found out some other things about certain players and certain situations, and that’s what you try to do. So we will take all the positives from it.”

Basically the game went as scripted. The undermanned Spurs kept the game close for the entire first half. Even had a lead for a significant part of it.

But Westbrook led a third quarter charge and the Thunder blew out the game.

“He does that. He had a couple of great drives, some steals; he got out on transition and did a really nice job finding guys,” Thunder coach Billy Donovan said of Westbrook. “Certainly he shot the ball at a highly efficient level, tonight. I thought he all around played a really, really good game tonight and played exceptionally well… I thought his offense kind of answered and stopped some runs and as you mentioned that second and third quarter he really played well.”

Oklahoma City has now won seven straight games and held its fourth opponent in that span under 100 points.

“I thought as the game wore on we got progressively better. In the first half, at least in the first quarter, I thought we gave up six offensive rebounds,” Donovan said. “I think we had five or six turnovers in that first quarter. I thought our first-shot defense was pretty good. I thought for the most part in the game we defended pretty well. I think we continue to evolve and get better on the offensive end of the floor. You know, it was a hard game but I think there were some areas of improvement that we continue to show. I think we can hopefully learn and get better from this game.”