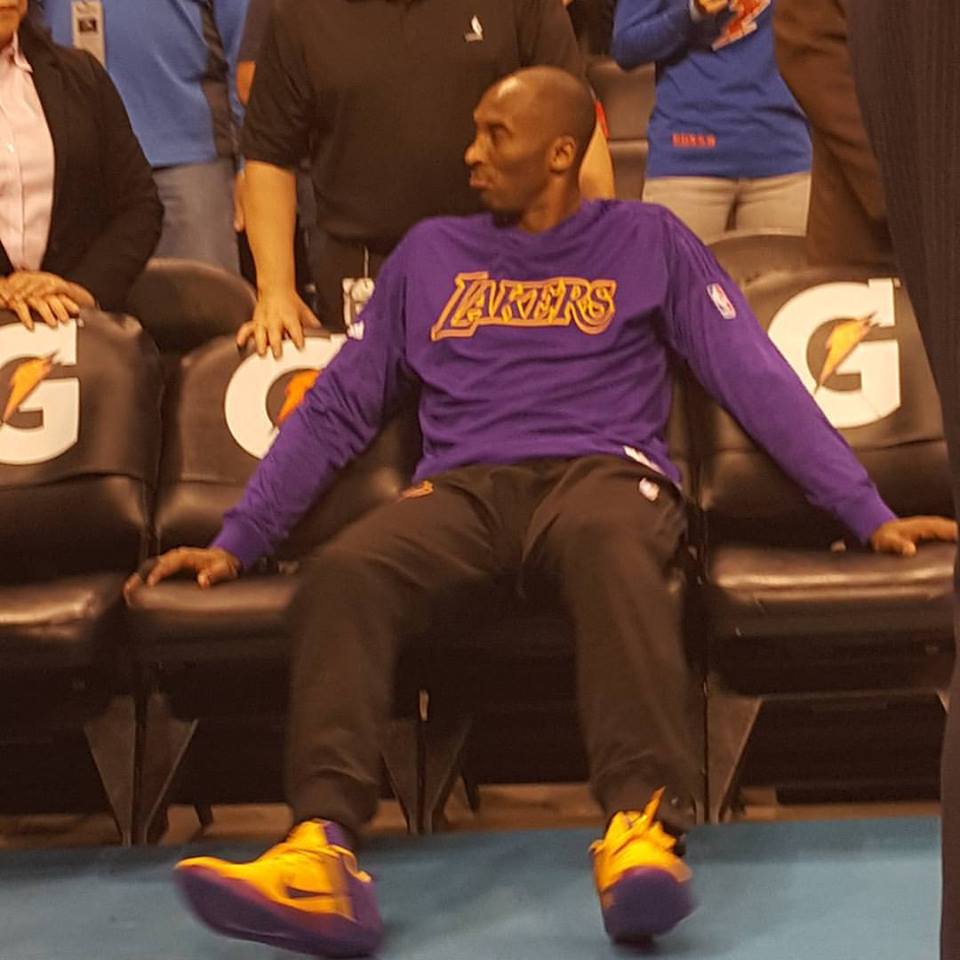 OKLAHOMA CITY — The Oklahoma City Thunder became part of history Monday night. They hosted the L.A. Lakers in what would be the final road game of Kobe Bryant’s illustrious career.

While the Thunder won convincingly, that ended up being secondary to the players most important purpose on night. The stars of the Thunder  wanted to make sure Bryant knew they had been watching,

“I remember when Michael Jordan was on his way out and Kobe didn’t take it easy on him,” Thunder forward Kevin Durant said. “That’s all I was thinking. I was trying to destroy him every chance I got. Every time I got the ball, he was ‘Come on. Let’s see what you got.’ That shows what type of player, what type of competitor he is. I just wanted to play against him one last time.”

For Russell Westbrook, it was also an extremely important night for him. Growing up in Los Angeles, he saw Bryant when he was just a young kid and to be on the floor for his second to last game was special.

Bryant was equally impressed with the leaders of the Thunder. He said he knows he is leaving the game in good hands with players like Westbrook and Durant.

“No question. No question about it,” Bryant said. “I think the league is filled with young, talented players, competitive players, players that really love the game and care about the game. No doubt about it.”

While Bryant said Durant has no flaws in his game, he also stated he and Westbrook share similarities on the court.

“A ton. A ton. I mean, I didn’t smile much on the court either,” Bryant said. “He plays the game with such an energy, with such an aggressiveness, and it needs to be appreciated. It needs to be appreciated. He is not out there trying to be cute with the basketball. He is not out there trying to make friends. That guy is playing hard every time down. It takes a lot of energy to be able to do that, and he is just never seems to run out of it.”

Before the game began, Westbrook and Durant presented Bryant with a special gift. It was a book that had a message from each member of the Thunder.

“I haven’t had a chance (to read it) yet,” Bryant said. “I’m looking forward to reading them though. It was extremely thoughtful. It takes time for players to be able to sit down and do that. I think the biggest thing is to have memories, especially very personal things, like stories that I might have forgotten from a particular matchup that they remember and then they write it. It’s something that you kind of go back to and remember those times on a very personal level. It’s a cool gift.”

But Bryant may have left the Thunder duo a gift that will last them much longer. His dedication to the game is something each has been watching since they entered the league and will continue to follow.

“I remember one time after my first year in the league, we had Olympic trials in Vegas and we had a day off,” Durant said. “That’s when the young players and the Olympians were all together. They had two buses ready for guys to go work out. Me and Jeff Green were the only two on the first bus. Right when it was about to leave we see Kobe walking on by himself when everybody else took the day off. We worked out on one end and he worked out on the other. He made 50 shots from the 3-point line. That takes a lot to make 50 from seven spots. He was dripping with sweat. The best player in the league and he took a bus to a high school gym to put some work in. He’s old school and that’s exactly what I wanted to be like.”