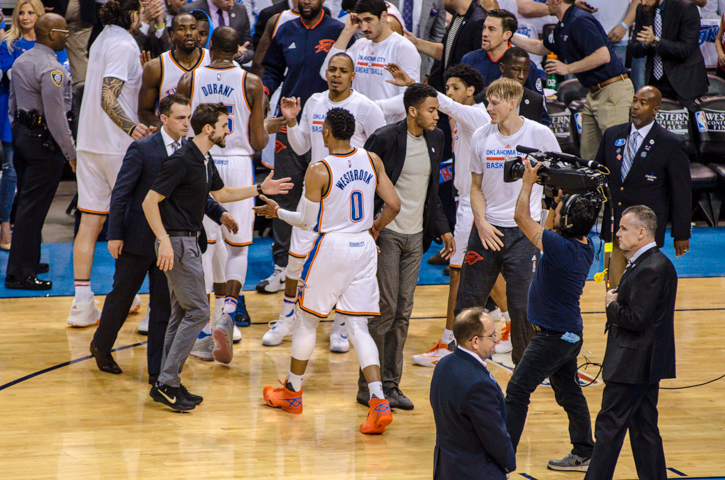 OKLAHOMA CITY – It’s been four years since the Oklahoma City Thunder have had a chance to close out a series to get the NBA Finals, so they may have forgotten just how tough it is. It may have slipped their mind just how much.

If so, Game 5’s 120-111 loss Wednesday was a reminder. The Thunder played hard, but not hard enough to knock off the defending champion on the road in a hostile environment.

“We’re playing against a terrific team and we have great respect for them,” Thunder coach Billy Donovan said. “This series has made us better. It’s helped us improve. It’s helped us grow and get better. We’re in a series right now, and it’s on to the next game. We’ll have to go back and regroup, and really prepare as well as we can (Saturday) at shootaround and try to get ready to play again.”

Before Game 5 even tipped off, Warriors coach Steve Kerr told everyone the frame of mind his team was going to be in the rest of the series.

“They are determined, and they want what we have,” Kerr said. “We have a banner hanging up in here and we take great pride in that. It’s a hard thing to accomplish, and they’ve been close, but they haven’t done it, and they’re coming after us. They’re really getting after it and playing well and competing. We’ve got to stand up to that. We’ve got to match-up to that intensity.”

And that’s what Golden State did. While they didn’t look like the 73 win squad that rolled through the regular season, the Warriors played hard and with grit. They are not ready to stop being NBA champions.

That dog Green spoke of showed up in the hustles points and at the free throw line, where they held a 34-24 advantage in attempts. They also tied the Thunder with 45 rebounds, which is a loss Oklahoma City, the top rebounding team in the league.

Despite the loss Oklahoma City still lead the series 3-2 heading into Game 6 Saturday at the Chesapeake Energy Arena. They are still one home victory away from a second appearance in the NBA Finals since 2012.

Even though the Thunder dismantled the Warriors in games 3 and 4 at the Peake, Kevin Durant doesn’t want his squad to fall into the trap of just believing because they are at home, they have an easy win in store.

“We know we’re going back home. But we can’t relax,” Durant said. “We’ve got to keep our foot on the gas, and we’ve got to play much better. I thought we played extremely hard tonight. They didn’t outplay us, they didn’t outwork us. I thought both teams were in a slugfest (Thursday). So we’ve got to bring that energy back home. It was a matter of us making a few shots and playing a little more solid defense on them. We’ll see what happens.”

2 thoughts on “Time for the Thunder to make a stand”