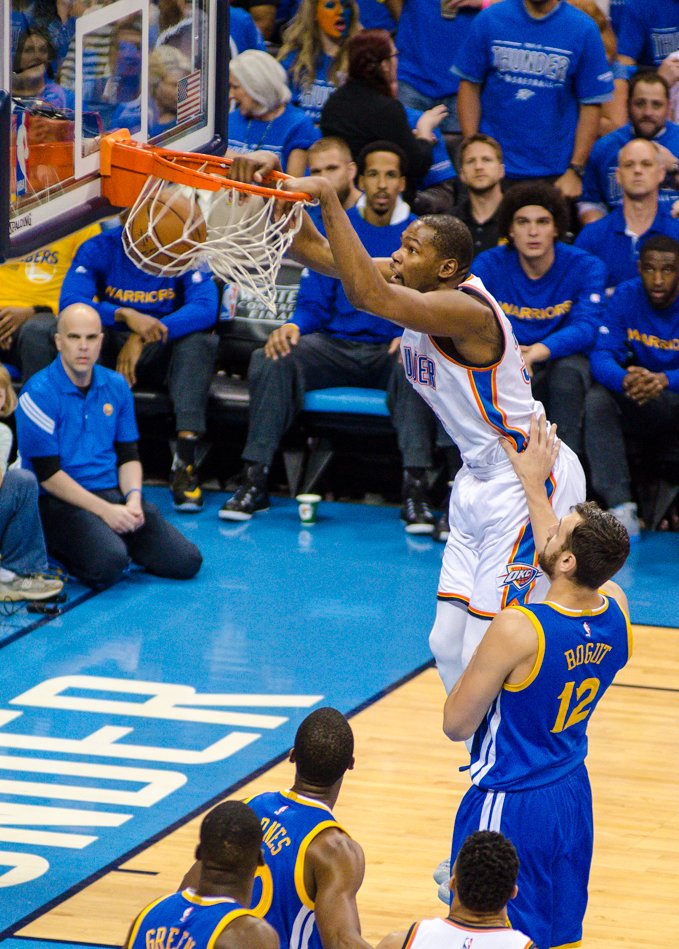 Kevin Durant throws down a dunk in Game 6 against Golden State. (Photo by Torrey Purvey).

Game 7s are nothing new to the Oklahoma City Thunder. Since 2011 they have played in two of them and won both.

However, the one the Thunder face tonight is much different than any situation they have taken on before. Not only is a trip to the NBA Finals on the line, but they are encountering the reigning NBA champs and two-time MVP on the road.

There is nothing about the scenario that works in the favor of Oklahoma City. All the odds are against the visiting team, but Kevin Durant seems to relish the moment to overcome those adversities.

“This is what you dream about, getting this opportunity,” Durant said. “We’ve got to take advantage of it. Go up into their building, and it’s going to be great atmosphere. We’re looking forward to the opportunity.”

Oklahoma City finds itself in this crucial Game 7 of the Western Conference Finals after blowing a 3-1 series lead. That includes a fourth quarter meltdown in Game 6 Saturday at home in which Durant posted just four points and two costly turnovers.

Yet, despite all of that, the Thunder insist they are coming into the biggest game of the season confident.

“We’ve been tested all season. We’ve been tested since I’ve been here,” Durant said. “We never let anything linger over or bleed over into the next day. That’s the motto we always have, even in a regular season. We lose a game, we move on. We win a game, we move on. The playoffs is no different. It’s on a bigger scale because you play the same team over and over. But we’ve got to move on and get ready for the next one.”

The Warriors have every right to be just as confident, if not more. They have staved off elimination in back to back games and have been nearly unbeatable at home.

However, according to Golden State coach Steve Kerr, the best trait his team has going for them in a game like this is toughness.

“I’ve learned that our players are tough. They’re mentally tough,” Kerr said. “I don’t know if I really learned that. I already knew that. But they’ve firmly confirmed that. It’s been a great comeback. Now we still have to play. We still have another game.”

What the Warriors also have are players who have proven they can come up big in the biggest moments. Steph Curry and Klay Thompson have each carried the team with deadly 3-point shooting and scoring barrages when the Golden State needed them the most.

If not for Thompson’s 11 three-pointers in Game 6, this series is over and the Thunder are preparing for Game 1 of the NBA Finals.

“Steph and Klay are as good as anybody I’ve ever seen in terms of just moving forward and taking the next shot, making the next play,” Kerr said. “Not worrying about a miss or even several misses. That’s the right mentality. It’s a difficult mentality to achieve for a lot of people, but not for them. They have so much belief.”

That is something the Thunder haven’t proven totally, yet. They were able to comeback from a blowout loss to San Antonio in Game 1 of the semifinals and another thrashing to the Warriors in Game 2 of this series.

But this is the first time their actual season is on the line. It’s a chance for Durant and Russell Westbrook to prove they are in the class Curry and Thompson as far as big game performers. That they can carry a team when everything is stacked against them.

It’s the type of game all the greats of the NBA have had to cross off their check list on their way to all-time status. Magic Johnson, Larry Bird, Michael Jordan, LeBron James, Kobe Bryant, etc. Durant wants that moment.

“I think it’s okay to want it so much. I think sometimes you want to calm down a bit because you want something so bad,” Durant said. “It’s difficult to really talk about because it’s something that I’ve been feeling. It’s like you’ve been dreaming about this moment since you were a kid. You’ve been wanting this moment since you were a kid. That’s all that’s been talked about is playing in the big games in the playoffs.

“I think that it’s okay to want it so bad,” he continued. “But at the same time, I’ve just got to relax a bit.”

Michael Kinney is a freelance writer and can be reached at Eyeamtruth@gmail.com

3 thoughts on “The stars come out in Game 7s”