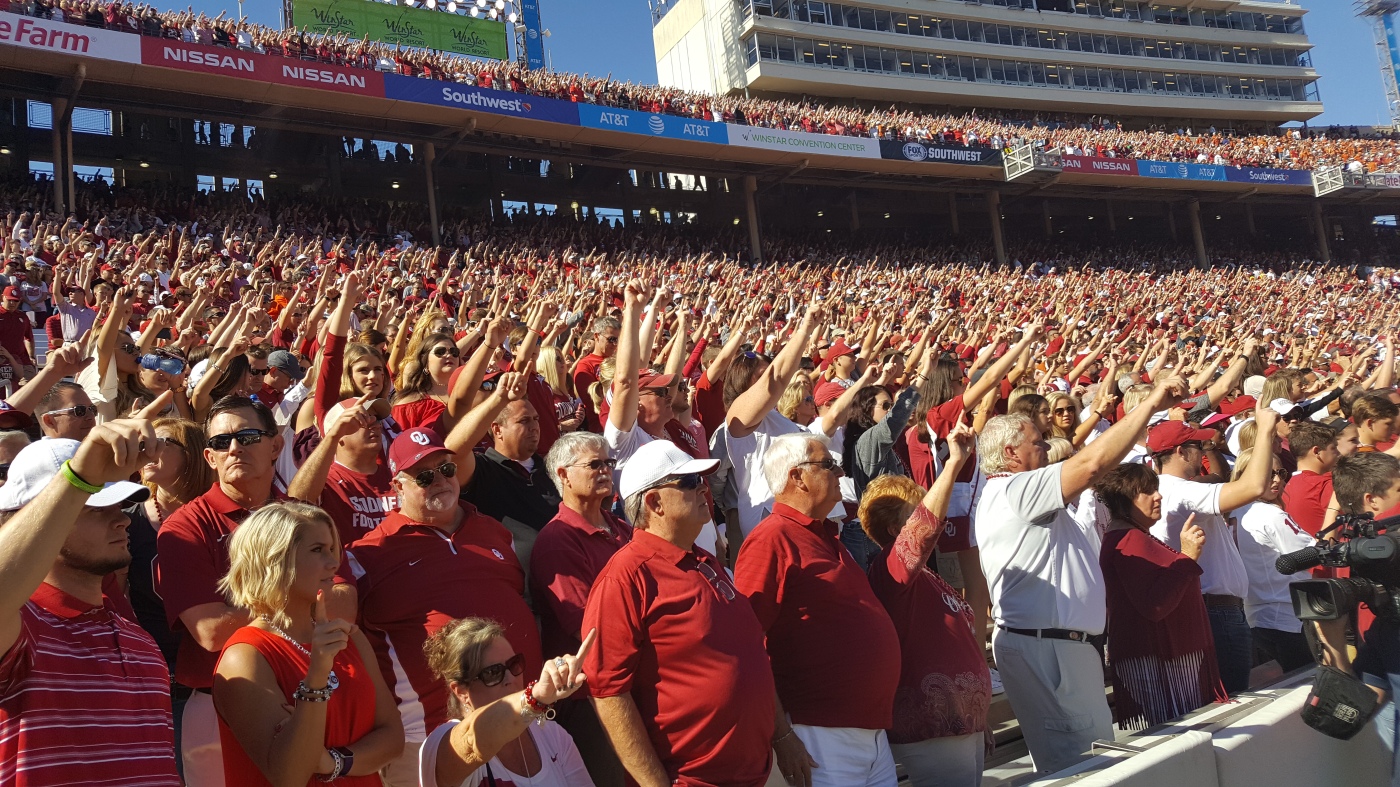 DALLAS – After most of 92,000 fans had cleared out of the Cotton Bowl Saturday, the Oklahoma Sooners were still on the field celebrating. The coronation of gold cowboy hat and the group photo in front of the scoreboard had to be taken after the Sooners 45-40 victory over Texas.

However, the one celebration that stood out from the rest involved quarterback Baker Mayfield. The junior signal caller grabbed a giant OU flag right as the band started to play the Sooners fight song. He raced around the field, did a few spins as his teammates chased him then as the song ended, he slammed the end the flag pole into the ground.

“It’s special to me. I grew up in Austin so I know what this rivalry is all about,” Mayfield said. “I’ve been waiting a long time to finally get a win against these guys. It felt good to go out and celebrate with the team.”

It was a fitting end to an afternoon that saw Mayfield and his Sooners (3-2, 2-0) scratch and claw their way to hard fought win over a team that needed the victory just as much as they did.

“I didn’t know what it was going to be like, but I knew of the rivalry and what it was like,” Junior Emmanuel Beal said. “I knew I would have to play my best game. We knew we were going to have to play our best game of the season to come out with a victory.”

But the win didn’t come easy.

Texas (2-3, 0-2) scored midway through the fourth quarter to cut Oklahoma’s lead down to eight points. The Sooners responded with a clutch Austin Siebert field goal with 2:36 left in the game to put the Sooners up 45-34.

The Longhorns took over on their own 20 yard line with 2:30 left on the clock. They were down to the Sooners 20 with 1:51 left. The very next play D’Onta Foreman scored and OU’s lead was down to 45-40 after a missed the 2-point conversion.

Texas went for the onside kick, but the Sooners recovered it.

Texas forced OU to punt and took over with 17seconds left. After two failed attempts to get the ball down field, the Longhorns were only left with the hope of a miraculous play to come from several laterals that the Sooners stopped defended.

“We just had to stay calm, we knew that it was going to be a dog fight coming into it because it always is, no matter their record or our record is,” Sophomore Orlando Brown said. “We just have to come out, be motivated and be consistent. We had some unnecessary turnovers throughout the game, but we showed our resilience and we just did what we do best.”

The Sooners started the game off like they had in past contests. The offense drove down the field, but stalled just outside the redzone and Siebert missed a field goal attempt.

Mayfield threw back to back interceptions on the Sooners next two possessions. It would have amounted to an horrendous start, but the OU defense held the Longhorns to a field goal.

Oklahoma finally got on the board after recovering a Texas fumble deep in the Longhorn’s territory. Samaje Perine scored on a 2-yard plunge to put the Sooners up 7-3 with 1:42 left in the first quarter.

However, the Longhorns quickly retook a 10-7 advantage to start the second quarter.

Much of the first half was filled with mistakes, turnovers and penalties by both teams. There was no rhythm or momentum to the game.

Oklahoma overcame that late in the first half when Mayfield slung a pass down down the field to a wide open Dede Westbrook. With his defender falling down he was able to stroll into the endzone for a 71 yard TD to give OU a 14-10 advantage.

Despite the reputation Oklahoma’s Jordan Thomas carries as a shut down corner, UT quarterback Shane Buechele kept testing him on deep passes down the sideline. But Thomas rose the occasion almost every time to prevent the completion.

However, at the start of the third quarter, Buechele went at him on back to back possessions and connected for touchdowns.

Not to be outdone, after Mayfield hooked up with Westmoore alum Dahu Green down the left sideline, the QB scored on a short run to put Oklahoma back in front in the sea-saw affair.

On their next possession, it was Mayfield to Westbrook again. Their third TD of the afternoon gave the Sooners a 35-27 advantage.

An interception by Midwest City native Will Sunderland gave the Sooners the ball back late in the third quarter. It led to a time consuming drive in which the OU offensive line pounded open holes and all the way down the field. Perine scored from 2-yards out and Oklahoma went up by 15.

“That turnover was big, too. Will has done some good things,” Defensive coordinator said. “ We have to make the game where Will can be a factor because he’s a very talented player. That’s part Will, that’s part us getting him in position where he can really use his ability to play. It was a little reminiscent of Zack Sanchez’s interception against Tennessee. That’s the first thing I thought of. It really put us in a good position.”

“Dede was huge. He had some big ones. We thought we had some good matchups there,” Offensive coordinator Lincoln Riley said. “It’s been good the last two weeks to get him healthy. He’s a big part of what we’re doing. Bake had some really nice throws to him, protected by our o-line. When you do what we did running and throwing the ball, there’s a lot of people playing well and Dede did a great job of finishing those off.”

OU will look to move to 3-0 in Big 12 Conference play Saturday when they host Kansas State. Kick-off is set for 11 .m. at Memorial Stadium.