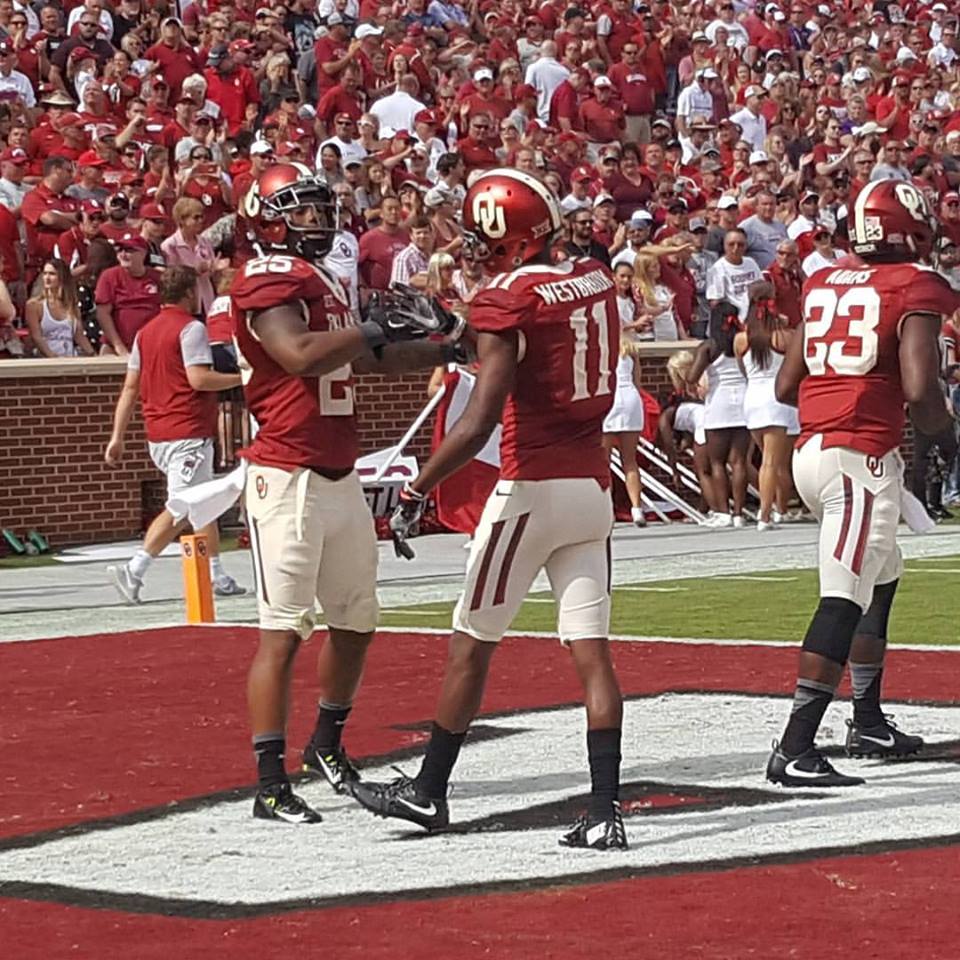 NORMAN – The start of the season was not a good one for Dede Westbrook. With the expectations of replacing Sterling Shepard as the lead wideout, the Cameron, Texas native was nearly invisible in two Oklahoma losses.

But then the Sooners entered Big 12 Conference play and the senior seemed to find his stride. That continued Saturday in Oklahoma’s 38-17 victory over Kansas State at Memorial Stadium.

Westbrook finished the day with 9 catches, 184 yards and three touchdowns. His eight scores over the past three games eclipsed former Sooner Ryan Broyles record of seven.

Yet, the first thing Westbrook wanted to talk about were plays he didn’t make.

“We did pretty good,’ Westbrook said. “Offensively, we had a few drops that we missed out and we want back. Ofcourse I want that deep pass back. I’m pretty down on myself about that because that’s something I can control. But we will get it together this coming up week in practice.”

But it wasn’t just Westbrook who did work against the Wildcats. The team accounted for 510 total yards, including 372 through the air.

The Sooners also held K-State to 335 total yards and 17 points. KSU had been averaging 34 points a contest.

The Sooners came out of the starting blocks on fire. On the first possession of game, they went on a seven play drive that lasted 2:36. it ended with Baker Mayfield dumping off a short pass in the flats to Samaje Perine. From there he took it 25 yards into the endzone to give Oklahoma 7-0 lead.

The points kept on coming on Oklahoma’s next drive when Mayfield went to his elite tailback, Joe Mixon, with a short pass. This time Mixon hurdled a KSU defender on his way into endzone for the score. With less than six minutes left in the opening quarter, OU led 14-0.

“They weren’t doing anything that we weren’t expecting,” KSU’s Jordan Willis said. “It was just struggling on the tackling. Guys were hitting them, but they weren’t wrapping up.”

The Wildcats didn’t get flustered or get away from their game. They preceded to go on an eight minute and 30 second scoring drive to cut the Oklahoma lead in half.

OU came back with a half back pass from Mixon to Westbrook, who didn’t start the game to missing a practice last week. It was the first time a runningback from Oklahoma had thrown a TD pass since Joe Washington in the early 70s.

“Joe was sensational running the football, making a really good defense miss him on a good number of occasion and get extra yards, ran tough in a lot of instances,” OU coach Bob Stoops said, “caught the ball well, had a big kick off return and then goes and throws a touchdown pass. I saw the play design and as soon as I saw it, I said “Ah, that’s one of those. That’s a score.”

The Oklahoma defense shut down the Wildcats in the third. With Ogbonnia Okoronkwo getting pressure in the backfield and Jordan Thomas, Will Johnson and Jordan Parker playing solid coverage in the secondary, they had Kansas State on their heals.

But the Wildcats were able to get on the board again in the fourth when Dominick Keith got behind Thomas on a broken play for a 54 yard scoring catch.

After Kansas State forced the Sooners to punt, they had an opportunity to make it a game. But once again, the Oklahoma defense came up with 4th down stop and took over on the 12 yard line.

The Sooners decided to put the game away at that point. With Kansas State in man defense, Mayfield went to Westbrook down the middle of the field for an 88 yard touchdown.

“He’s separated himself,” Offensive coordinator Lincoln Riley said. “He’s doing a lot for us. Similar to what Shep (Shepard) did for us last year, but in a different way. When Dede get’s one-on-one, he can win the battle down the field. That’s been important for us against teams trying to load up and stop our run game.”

Mayfield was 24 of 31 for 346 yards and four TDs. It is the fourth time in his career he has tossed four or more touchdowns.

Perine left the game with a slightly pulled muscle, but Mixon and Abdul Adams picked up the slack in the OU run game.

The Sooners head to East Texas Oct. 22 to take on Texas Tech. They have a chance to run their conference record to 4-0. It’s also an opportunity to exact some revenge for Mayfield, who played there before transferring to Oklahoma.

“They will be ready for me when I get down there, that’s for sure,” Mayfield said. “I’m excited for it. It’s always fun playing in Lubbock and this time I’m obviously on the other side of it. It’ll be an interesting matchup. I’ll get my guys ready and it should be a pretty good time.”

One thought on “Sooners get big day from Westbrook”