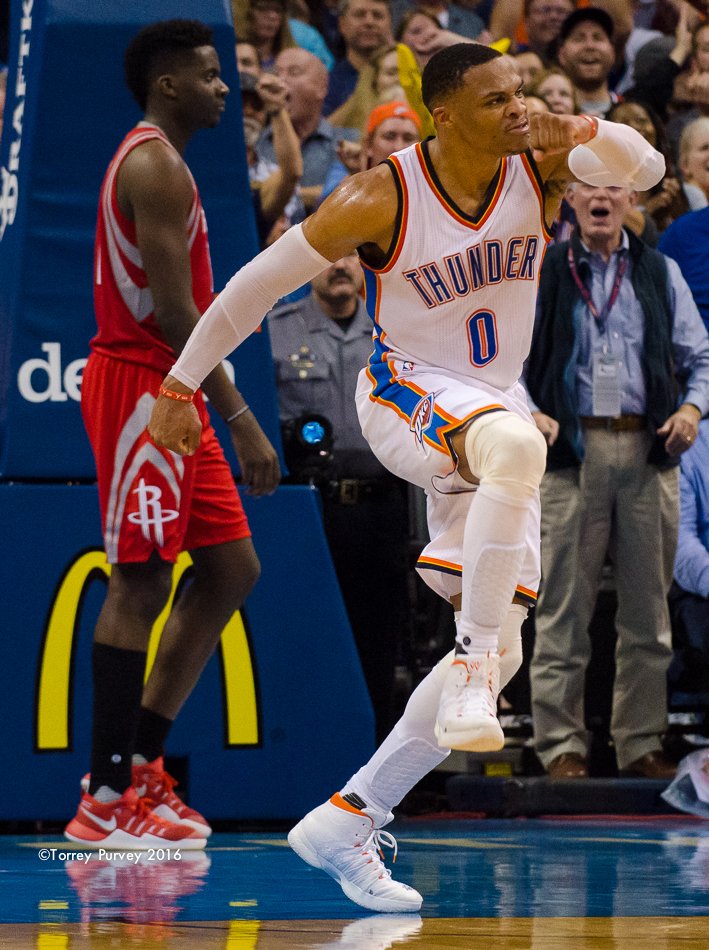 OKLAHOMA CITY – When Russell Westbrook is on the court, he doesn’t have much compassion. The same man that was handing out Thanksgiving dinners to the poor Tuesday night, was trying to rip the heart out of the Houston Rockets on Wednesday.

So when the Thunder needed a play to be made, Westbrook wasn’t going to do it nicely. The 6-3 point guard came up with a crowd erupting dunk to preserve the 105-103 victory over the Rockets at the Chesapeake Energy Arena.

“I just stay in attack mode,” Westbrook said. “I’m honest with myself and I’m honest about my game and what I’m able to do at a high level. Getting to the basket is something I do well. That’s what I try to do.”

Westbrook scored 30 points on 9 of 20 from the field to go with nine assists and seven rebounds. He also shot 10 of 11 from the free-throw line.

Thunder guard Victor Oladipo posted 29 points and 10 rebounds. No other player from Oklahoma City scored in double figures as they broke a four game losing streak.

“We were just getting good looks, shooting with confidence, starting to get comfortable,” Oladipo said. “Lots of guy’s shots are going in and just shooting it with confidence.”

The Rockets shot 48 percent from the field for the game. However, they managed on 6 of 21 shooting in the pivotal fourth quarter.

“We got the looks that we like, the looks that we’re going to take,” Houston’s Trevor Ariza said. “Unfortunately, we just didn’t hit them tonight. We felt like we gave this one away. But they were the hungry team tonight. They came out did what they needed to do.”

With 5:38 left in the fourth, Westbrook nailed a corner 3-pointer to cut Rockets lead down to 100-97. Oklahoma City came up empty on their next three possessions before Oladipo tied the game with another 3-pointer.

Harden missed a jumper and the Thunder came down and took advantage with a Westbrook to Andre Roberson alley-oop dunk to give Oklahoma City a 102-100 advantage with 1:43 left.

Houston got the ball with a one minutes on the clock. Harden passed to Trevor Ariza, who missed a 3-pointer from in front of the Thunder bench.

Oklahoma City got the rebound and Westbrook was fouled. He missed 1-of-2 from the line as the Thunder went ahead by 3.

Harden missed a 3-pointer but the Rockets got the loose ball. However, they threw it away trying to set up another 3-point attempt.

Oklahoma City threw the ball inbounds with 12.4 on the clock. Alex Abrines got the ball and drove to the rim instead of making the Rockets foul him. He missed the layup and the ball went out of bounds.

After a replay, the ball was given to Oklahoma City. This time the ball went to Westbrook, who drove straight to the rim and threw down a ferocious dunk on the Rockets Clint Capela, who stands 6-foot-10. But that didn’t seem to bother Westbrook as he put the game to sleep.

“I It don’t matter,” Westbrook said. “The game is on the line. You get blocked or you make a dunk. It’s one or the other. Fortunately it went in and closed the game for us.”

After a string of subpar games, Oklahoma City’s Steven Adams started out the night looking to have an impact offensively. He hit his first three shots for a quick six points in the first quarter.

The combination of Adams, Oladipo and Westbrook combined to score 23 first-quarter points as the Thunder took 38-32 lead.

It was the Rockets bench that got them back into the game after being down by 13 points. The 3-point shooting of Anderson, Ariza and Sam Dekker gave the Rockets a five-point lead in the second quarter.

However, Westbrook and Oladipo stayed hot and carried the Thunder to a 65-63 halftime advantage. The Oklahoma City backcourt had combined for 35 points on 13 of 19 shooting.

What made the Rockets offensive outburst so impressive was that Harden wasn’t looking for his shot. By the end of the third quarter, he had only 11 points. However, he was controlling the game with his passing like a veteran point guard and not just a guard who plays the point.

However, the Rockets could have used more of the scoring guard, but harden admitted his shot just wasn’t falling and had nothing to do with defense of Andre Roberson.

“I missed shots,” Harden said. “Normal game, just didn’t make shots. Especially down the stretch when we needed to.”