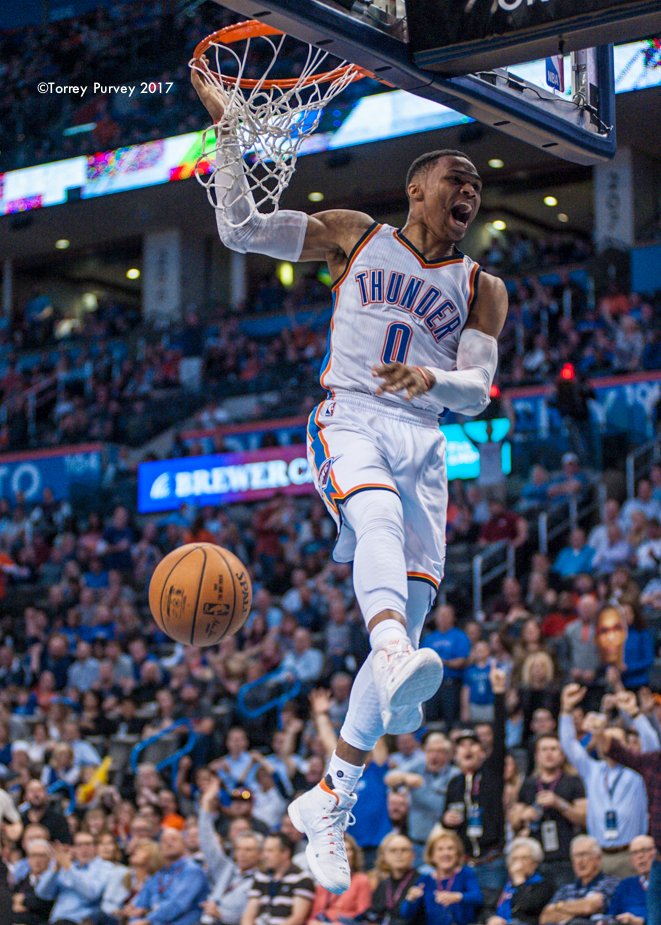 OKLAHOMA CITY — When Russell Westbrook strutted into the Chesapeake Energy Arena Wednesday afternoon, the Oklahoma City guard may have been sending a message to his team. Wearing a bright red  and black Judas Priest t-shirt could have been a gentle reminder to play hard and loud at all times.
Whether it was a message or not, that is what the Thunder did as they held on to beat the Memphis Grizzlies 103-95 Wednesday at the Chesapeake Energy Arena.
“That was our main focus coming,” Thunder center Steven Adams said. “Memphis is known to be physical so we just tried to match that and take it to another level.”
Russell Westbrook tallied 24 points, 13 rebounds and 12 assists for his 18th triple-double of the season. That is the most by any player since Magic Johnson during the 1981-82 season.
“I just read the game,” Westbrook said. “You have to read it. Makes plays and take what the defense gives you.”
Enes Kanter poured in 19 points and 13 rebounds. Victor Oladipo added 16 points on 5 of 10 shooting. Oklahoma won the rebound battle 53-39 as the Thunder improved to 24-16.
Guard Mike Conley led the Grizzlies with 22 points and six assists. Chandler Parsons and Zach Randolph each scored 14 points as Memphis fell to 24-17.
“We missed a lot of shots and a lot of free throws throughout the course of the game,” Memphis guard Vince Carter said. “We are going to look back and see that bit us a little bit.”
With 4:48 left in the game, Conley came up with a steal and layup to cut Thunder lead down to 85-82. But Kanter responded with a tough basket in traffic while being fouled. The ensuing free throw put the Thunder up by six.
After Randolph knocked in a quick shot, Westbrook threw up an air-ball. Randolph came back down and hit another jumper to close gap to 88-86.
A Kanter tip in put Oklahoma City back up by four. With 1:55 left, Carter missed a pair of free throws. Westbrook turned the ball over and Conley tried to make the Thunder pay with a long 3-pointer. But Adams came up with the blocked shot.
“It was an incredible play by Steven,” Thunder coach Billy Donovan said. “Just the ability to run the floor and I give all of our guys a lot of credit. There were so many plays for our team tonight that guys had to give multiple efforts, extra efforts.”
That led to Oladipo knocking down a dagger 3-pointer with 1:13 on the clock.
Tray Daniels missed a 3-pointer for the Grizzlies. Westbrook sprinted up court and passed off to Jerami Grant for a thunderous two-handed dunk and foul. Oklahoma City went by 10 with only 46 seconds left. The Thunder put the game away at the free-throw line.
“We had a chance,” Memphis center Marc Gasol said. “It was 80-84 for them and we had a chance to cut it down even closer than that, but we never got over the hump.”
After saying he felt disrespected by the Grizzlies in their previous matchup, Andre Roberson came out of the gates ready to back up his words.
Roberson hit 3 of 4 shots, grabbed three rebounds and swatted a blocked shot in the opening quarter.
That was the demeanor of the entire team for much of the night. They wanted to take the fight to Memphis this time around.
“We talked about it this morning,” Kanter said. “The most important thing was physicality. If you look at the Memphis team, they are known as a real physical team. But I think all of bigs did a good job.”