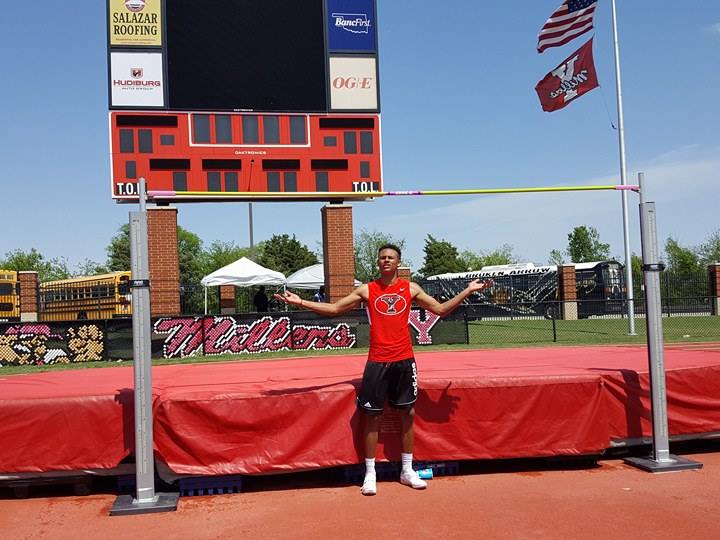 YUKON – Vernon Turner had planned on having an easy day. The Yukon High senior had been mostly knew the competition at Friday’s Yukon Classic would be solid, but nothing to fear for the nation’s top high jumper.

However, when Turner got to Yukon High Stadium, and despite the wild blowing severely, Turner was feeling good. In fact, he felt so good, he broke the National Federation of High School record with a leap of 7-foot-6.

“I guess his legs felt better than we thought,” Yukon assistant coach Kevin Ritter said. “Because we lifted on Monday and Wednesday and jumped on Tuesday. That usually gives you deader legs because we’re trying to peak late in the season. So we didn’t expect a whole lot. If he got 7-2, 7-3, we’d be good. But by the third jump, we knew it was a good day.”

Turner didn’t attempt his first jump until the bar had reached 6-09. By that time, all of the other competitors had been knocked out. Yukon teammate Tallyn Brazell, took second with a personal best jump of 6-7.

Turner could have stopped there, but he said he was feeling good and wanted to continue. Already owning the best mark this year and a state record of 7-5, he slowly progressed upward. He didn’t take off his practice shorts until he got to 7-4.

By that time, the entire high jump pit was packed with athletes and onlookers. Turner began a slow clap, which everyone joined in.

“When the clap came through, that’s when I really started feeling it on my legs,” Turner said. “Once we hit 7-4, I said yep, today is the day. I let’s just do it and see what happens,”

At 7-6, Turner once again had the crowd clapping with him before he skied over the high bar and made it easily. He plopped down into the pit jumped into the air screaming, knowing he had just made history.

While Turner’s jump was recognized as the top mark for a high schooler at a competition inside the United States, it’s not considered the best ever. That mark belongs to Andra Manson, who hit 7-7 while at a meet in Jamaica in 2002.

Knowing that, after Turner reached 7-6, he had the meet officials set the bar at 7-7.25, looking to dethrone Manson.

By that time, the entire meet had come to a standstill and all eyes were on Turner, who had three attempts to own the outright record. He came close on his very first jump. But the heal of his shoes clipped the bar. He was unable t make it in the next two tries, but Turner was not daunted that he will one day own the record.

“I thought I had it,” Turner said. “I definitely thought it when I hit the mat. I will just need the energy. The crowd definitely helps a lot.”

The Yukon Classic has become one of the biggest and most competitive track and meets in the state. With the multimillion dollar stadium being the site of the upcoming state track and field championships, it attracts the top teams in Oklahoma.

The Tulsa Union boys steamrolled to a team title with 140 points. They were 23 points ahead of second place Edmond Memorial.

On the girls side, it was Del City who grabbed the team crown with 91 points. That was enough to hold off a charging Edmond North, who finished with 85.

However, the numbers are slightly skewed for the girls because the Southmoore SaberCats only participated in half the meet because they were unable to come until school was out. Most of the other teams were out of school for the entire day due to Good Friday.

Despite that, the Cats were able to do damage because of their sprints and relay teams. Whitney Bridges claimed the 200 meter dash (24.47) while Kaylee Jimboy (46.81) took home the 300-meter hurdles title.

The Union Redskins racked up most of their points in the sprints. Along with winning the 4×100 and 4×400 relays, Keviyon Cooper and Travon Delph took first and second in the 400 meter dash, while Oklahoma football commit Tre Brown landed in fourth in the 100 meter dash.

Anthony Riley won the boys long jump. However, the sophomore from Westmoore was more excited that he beat his two teammates who had the two top marks in class 6A this season. Well, they did until Riley hit a personal best 24-10.

“I was really satisfied with how I performed,” Riley said. “I got a PR and I am just ready to keep going. I think it was a mental thing. I had the mentality I was going to win an I did. I am trying to get the state record.”

Quietly, without any fanfare, Turner entered the long jump for the first time in his career. With no practice, he took fifth with a jump of 22-09.

Turner will probably stick to the high jump once the postseason arrives. He already plans to try for 7-8 at the state meet.

Michael Kinney is a Freelance Writer with Eyeamtruth.com