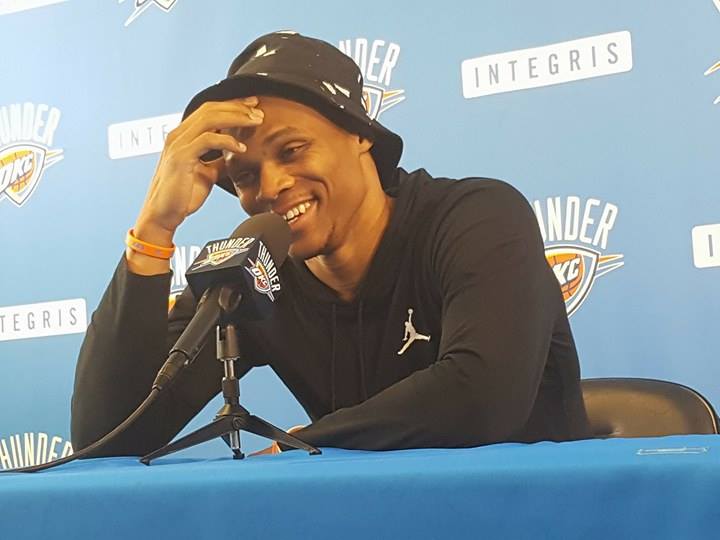 OKLAHOMA CITY – Russell Westbrook walked off the court Tuesday in Houston showing no emotion. The Oklahoma City point guard didn’t shake any hands, scream any profanities or even bow his head in dejection.

Westbrook walked defiantly back to the locker room when the Thunder season came knowing they had achieved more than anyone thought they could.

“I’ll remember just how we stuck together as a team. I think to me that’s the most important part. Like I said last night, with everything happening last summer, people counted us out,” Westbrook said. “They wasn’t sure how many games we were going to win or how far we were going to go or whatever, but I think the group of guys, we never let that sunk in our building. We stuck together, and that’s the thing I’m most proud about.”

Oklahoma City was eliminated from the postseason after losing to the Houston Rockets 4-1, but played all but one game down to the wire.

While many criticized the Thunder management for not providing Westbrook with more weapons to help him out this season, he maintained they had enough talent to get the job done.

“I honestly thought we had a team that could win just because of all the intangibles we had,” Westbrook said. “We have a group of guys that’s able to do a lot of things, and you guys seen games where you can see some little things, okay, like you guys have a team that can do what we — we play with the best of the best, and I think that’s how I feel. So regardless of who we have, my job is to make sure that we have a chance to win.”

Oklahoma City now heads into the offseason with the big decisions to make, once again. Westbrook can opt out of his contract at the end of the 2017-18 season. Even though the MVP candidate and triple double record holder says he loves being in Oklahoma City, he has not guaranteed he will be there long term.

“That’s something, like I said, I haven’t thought about anything, obviously,” Westbrook said. “Everybody knows that I like Oklahoma City and I love being here and I love everybody here. But I haven’t even thought about that. I’m worried about making sure my wife is all right along with everything else. It doesn’t really matter at this point, and that’s the most important thing right now with me moving forward.”

That puts the ball squarely in General Manager Sam Presti’s court in terms of putting together a roster than can keep the Thunder in contention to win NBA titles.

While players such as Steven Adams and Victor Oladipo just signed new extension this season, others will be free agents. That includes Andre Roberson, who’s tenacious defense and poor foul shooting made him a focal point in the playoffs.

“Andre gave us an opportunity in four of the five games to be right there with his defense and things that he did. Then certainly his scoring average going way up,” coach Billy Donovan said. “But this is the point I would make: Andre is a better free throw shooter than what he showed in that series. I said that I have confidence in him, and I do. But that’s an area of focus that he really needs to put the time and effort and energy into this off-season and continue to get better in those areas. No question he’s going to put focus on all areas of his game, but certainly his free-throw shooting.”

However, the question remains whether Roberson will be back with a new contract next season.

“I guess we’ll just see how it plays out. It was my first time going through it, so I don’t really know what to expect,” Roberson said. “I just got done talking to Sam, and I’ll talk to my agent here soon and kind of get both sides, so we’ll see where we go from there. Definitely want to be back. Definitely want to do anything to work it out. I love the team, love the organization, and love what we’re all about, and I definitely want to stick around. So I’m pretty sure we can work something out.”

The other big free agent on the team is Taj Gibson. Even though he has only been with the Thunder a few months after being traded from Chicago, he says he feels at home in Oklahoma City.

If Presti can keep Gibson in Oklahoma, he will be the biggest free agent to sign with the Thunder in franchise history.

With Westbrook in or entering his prime, it will be incumbent on Presti to bring in another elite level scorer to help carry the load. If not, next year could be another replay of 2017, which wasn’t all bad.

“I couldn’t be any more encouraged with the quality of people and the character that I had a chance to work with each and every day,” Donovan said. “So improvement always takes time. I can’t tell you that the jump we’ll make will be from here to here or where it will be. But every team, maybe outside of one, is trying to get better. That’s what we’re always going to do is try to get better.”

Michael Kinney is a Freelance writer with Eyeamtruth.com