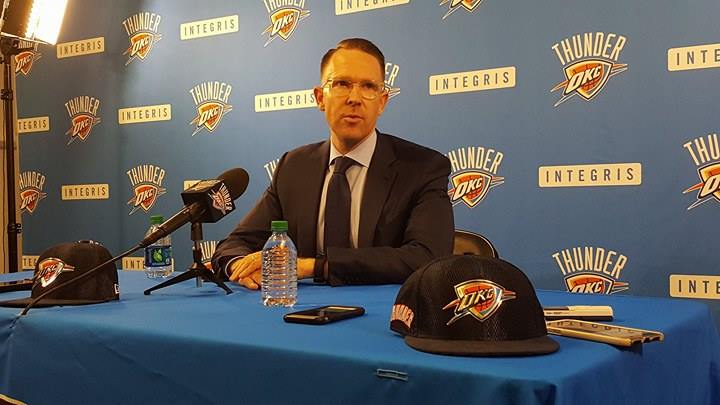 OKLAHOMA CITY– Terrance Ferguson has traveled a long way. From being born in Tulsa to playing high school basketball in Dallas to going to work overseas.

But the 6-foot-7, 184 pound guard finds himself back where it all started. The 19 year old was drafted by the Oklahoma City Thunder Thursday night with the 21st pick in the NBA draft.

“We’re thrilled to have him, add him to the Thunder,” General Manager Sam Presti said. “He represents I think a few things that attract us to him. Obviously it’s rare to find a player at his age that has the experience that he’s gained by being in different environments, the USA Basketball experience he’s had, the success he’s had there, and obviously overseas experience in Australia.”
Minutes after Ferguson heard his name called he tweeted out “Coming home,” on his twitter account.

Instead of going the college route, Ferguson left the United States to play in Australia in the. In his one and only season with the Adelaide 36ers, Ferguson averaged 4.6 points and 1.2 rebounds in 15 minutes a game.

Fersugon’s numbers do not tell his story. Playing against grown men for the first time, he comes back to the states a more mature player.

“He was highly athletic, he was supposed to go to Arizona,” ESPN’s Fran Fraschilla said. “The first American high school player to play in the NBL where he had minimum success, but he got a lot out of it. He played with adults. They beat him up, he handled it. He is the ultimate three and D guy down the road.”

Most analysts do not see Ferguson being an impact player right away for the Thunder. If that is the case, many fans will look at the selection as curious since the Thunder are in a win now situation with Russell Westbrook able to become a free agent after next season.

However, that late in the first round, there were not many players available who could make Oklahoma City a title contender in 2017-18.

The Thunder are getting a swing player who can shoot from long range, great jump shooter and is not only a good defender, but also a player who enjoys defending.

“I don’t know what will happen with Terrance, but I wouldn’t put limitations on him,” Presti said. “At the same time so much of it is what’s opportunity and placement, then development, how much hard work he puts in. The coaching staff has a vision for him, put him in position to be successful.”

Ferguson will wear No. 23 for Oklahoma City. The last player to hold that number for the Thunder was Dion Waiters.

Ferguson dealt with his first bit of controversy as a member of the Thunder minutes after he was drafted. Fans began to go back and pull up his tweets (@the2kferguson) from the past. Some of them included compliments Kevin Durant, Steph Curry and the Golden State Warriors on winning the NBA championship. Many of those were soon deleted his new fan base came after him.

All of that will be quickly forgotten if Ferguson can live up to the potential many believe he has. He was a member of USA basketball from 2013-15 where he played on the U19, U17 and U16 teams.

During his prep years, he was home schooled, but played for Prime Prep Academy for three years, which was a charter school created by NFL Hall of Famer Deion Sanders. He then played his senior year at Advanced Prep International, also in Dallas.

Oklahoma City’s part in the draft ended once Ferguson was drafted. With no pick in the second round, they became spectators for the rest of the night.

“I guess the best way to explain it is we try to get every pick. Every team does,” Presti said. “It’s not just us. Everyone’s trying to find ways to get in. Tonight, just based on the values of the different picks, we didn’t find something that we felt was justifiable for trying to accomplish. But we looked at all that stuff, had a lot of tough conversations. I thought there were some really good players in the second round that teams were able to get. It’s harder to get in.”