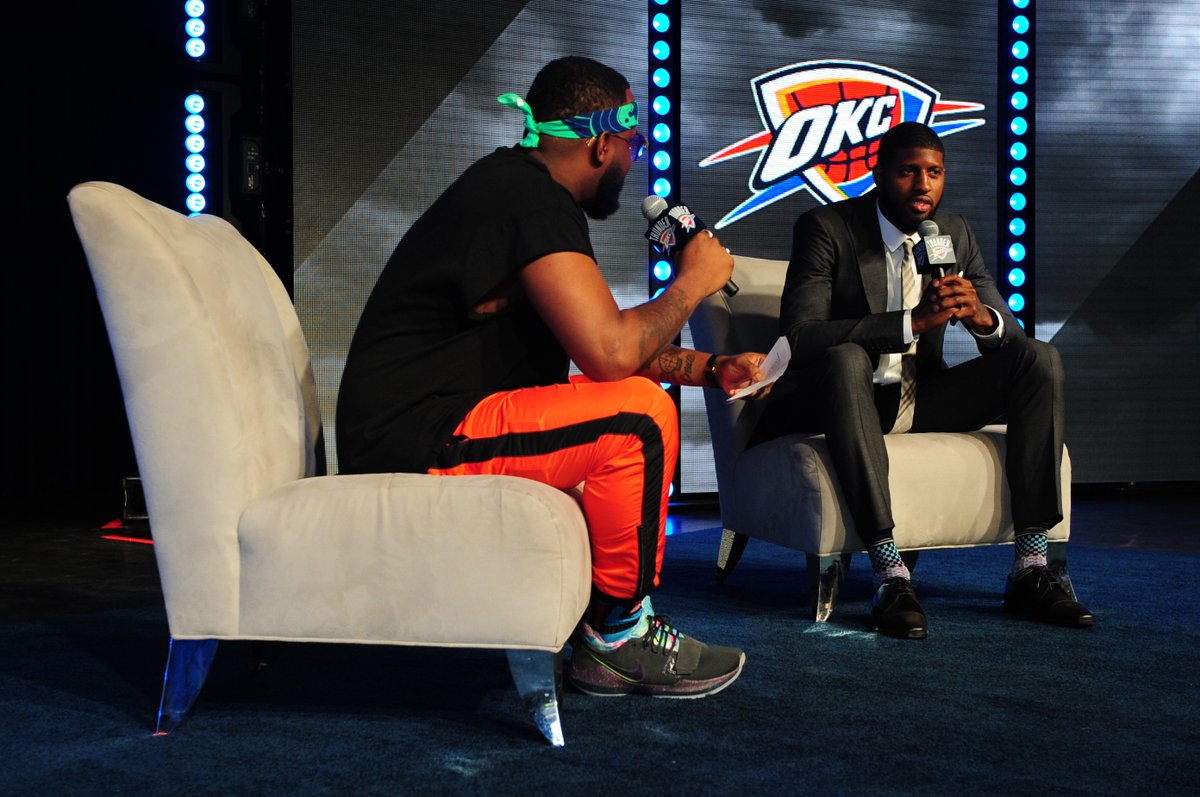 Paul George walked onto the stage at Jones Assembly seemingly unaware of what he was in store for. Deck out in a custom fitted gray suit, white shirt and brown striped tie, he was immediately hit with a loud and continuous cheer from more than a 1,000 Oklahoma City fans Wednesday night.

As the cheers got louder, George paced the staged patting his heart to show how much he appreciated the gesture.

For the Thunder, the start of their courtship of George could not have gotten off to a better start.

“It’s really been awesome. You can’t script this any other way,” George said. “It’s been an unbelievable trip. I’ve been wowed ever since I landed. This feels like home.”

Having George’s introductory press conference at the Jones Assembly and 21c Museum and Hotel in downtown Oklahoma City is all part of Thunder’s new philosophy. Instead of holding the pressers at their old practice facility in Edmond, the Thunder are being more proactive and show the players and the rest of the NBA a different side of the area.

This offseason it began with first round draft pick Terrance Ferguson having his press conference at the boathouse on the Oklahoma River. Then on Tuesday, free agent signees Patrick Patterson and Raymond Felton were introduced at the Aloft Hotel overlooking the city.

But the Thunder saved their biggest move for George, who they acquired in a trade for Victor Oladipo and Domas Sabonis.

George, who had played his entire career in Indiana, has one year left on his contract before he becomes an unrestricted free agent at the end of the 2017-18 season.

George had made it known in the past of his desire to return to his hometown of Los Angeles and play for the Lakers. So many believe the Thunder are just renting the 4-time All-Star for one season before he bolts for L.A.

When George was asked what could keep him in Oklahoma City past this season, he wouldn’t allow himself to be pinned down.

Because George left the door open that there is a chance he could stay with the Thunder, the franchise started its recruiting pitch the moment George flew into Oklahoma City Tuesday afternoon. He was greeted by more than 500 fans chanting “PG,” “PG.”

That excitement and fanfare spread over into the Welcome Party the next night. With his family by his side, George got a small taste of what he can expect throughout the rest of the season.

“I don’t want to say this too soon,” George said. “I felt the passion behind it. I love the connection that I had. That’s something that can’t be replaced ever.”

There is no way to tell how sincere George is about keeping the Thunder as an option in free agency. Thunder fans learned the hard way a year ago that what players say one day can be completely reversed the next.

However, all Presti wanted was a seat at the table. A chance to show George what the team has to offer and how he can fit into what they hope is a future NBA championship level team.

Presti, coach Billy Donovan, MVP Russell Westbrook, the rest of the team and the Thunder fans have an entire season to convince George of that.

“Paul really wants to win. It’s important to him,” Donovan said. “As a coach you have to do the best job you can each and every day to put him and the rest of the team in a position to play well. That’s a process that has to take place every single day.”