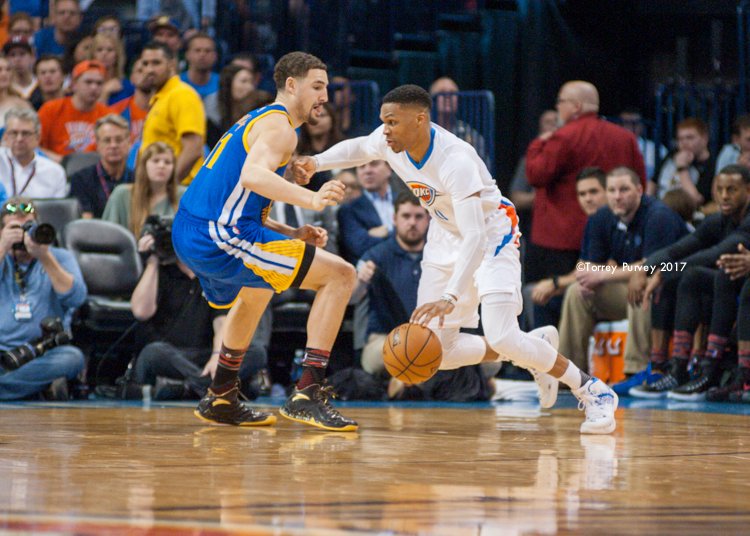 Many thought when Kevin Durant left Oklahoma City, that the franchise would lose its appeal nationally. As great as Russell Westbrook was, the feeling was the Thunder had dropped to the B-level when it came to must see TV.

However, that has proven to be a false narrative. First came last year’s ratings whenever the Thunder played in nationally televised games.

Second, is the NBA schedule for the upcoming season. Once again the Thunder appear in several big time matchups for the rest of the nation to see. They will play on national television 36 times, including six matchups each on ABC and TNT.

That includes the season opener for Oklahoma City. They are one of a few teams that will be featured in the first three nights of the season.

The Thunder will host the New York Knicks Oct. 19. In the past the Thunder have normally kicked off the season on the road. The game will be seen on TNT.

Oklahoma City will also play host on Christmas Day. This time the Houston Rockets are coming to town for a night contest that will feature Westbrook and Paul George against James Harden and newly acquired Chris Paul.

On New Years Eve, the Thunder will play host to I-35 rival, the Dallas Mavericks. This will be the eighth straight season Oklahoma City has played at home on New Years Eve.

One of the bigger games on the schedule not centered around a holiday is the first time the Thunder take on Durant and Golden State. The Warriors come to Oklahoma City Wednesday, Nov. 22, days before Thanksgiving.

The Thunder have also been slated for the unique opportunity to play one of its regular season games in Mexico. They will be taking on the Brooklyn Nets Thursday Dec. in Mexico City.

“We’re excited to be asked to participate in the NBA Mexico City Games 2017 as the NBA expands its global reach,” Thunder GM Sam Presti said. “As we enter only our 10th season of Thunder Basketball in Oklahoma City, we feel incredibly fortunate that our team and fan base will get to experience our first regular-season‎ game abroad.”

The Nets will be playing two games in Mexico City. One against the Thunder and the other versus the Miami Heat.

“These games will be our 25th and 26th in Mexico, the most played in any country outside of the United States and Canada,” NBA Commissioner Adam Silver said. “They will also mark the 25th anniversary of our first game in Mexico City, a milestone in our relationship with our Mexican fans and a further indication of our desire to strengthen our ties to Mexico and Latin America.”

The games will mark the first time the NBA has hosted four regular-season contests in Mexico in the same calendar year.  Last January, the Phoenix Suns took on the Dallas Mavericks (Jan. 12) and the San Antonio Spurs (Jan. 14) in Mexico City.

What is becoming another tradition I nthe NBA is having games played on Super Bowl Sunday. The Thunder will take part in are one of six games that will start before 6 p.m. as they hosts the Los Angeles Lakers on Feb. 4 at 1 p.m. on ABC

Also, 70 of the Thunder’s 82 regular season games will be available in Oklahoma City on Fox Sports Oklahoma, and all will be broadcast on WWLS the Sports Animal and the Thunder Radio Network.

As great of an offseason as the Thunder have had, some bad news crept into the cycle.

According to the Thunder it was proactive and he will be re-evaluated in 4 to 6 weeks.

Patterson is expected to be back by the start of training camp in September.