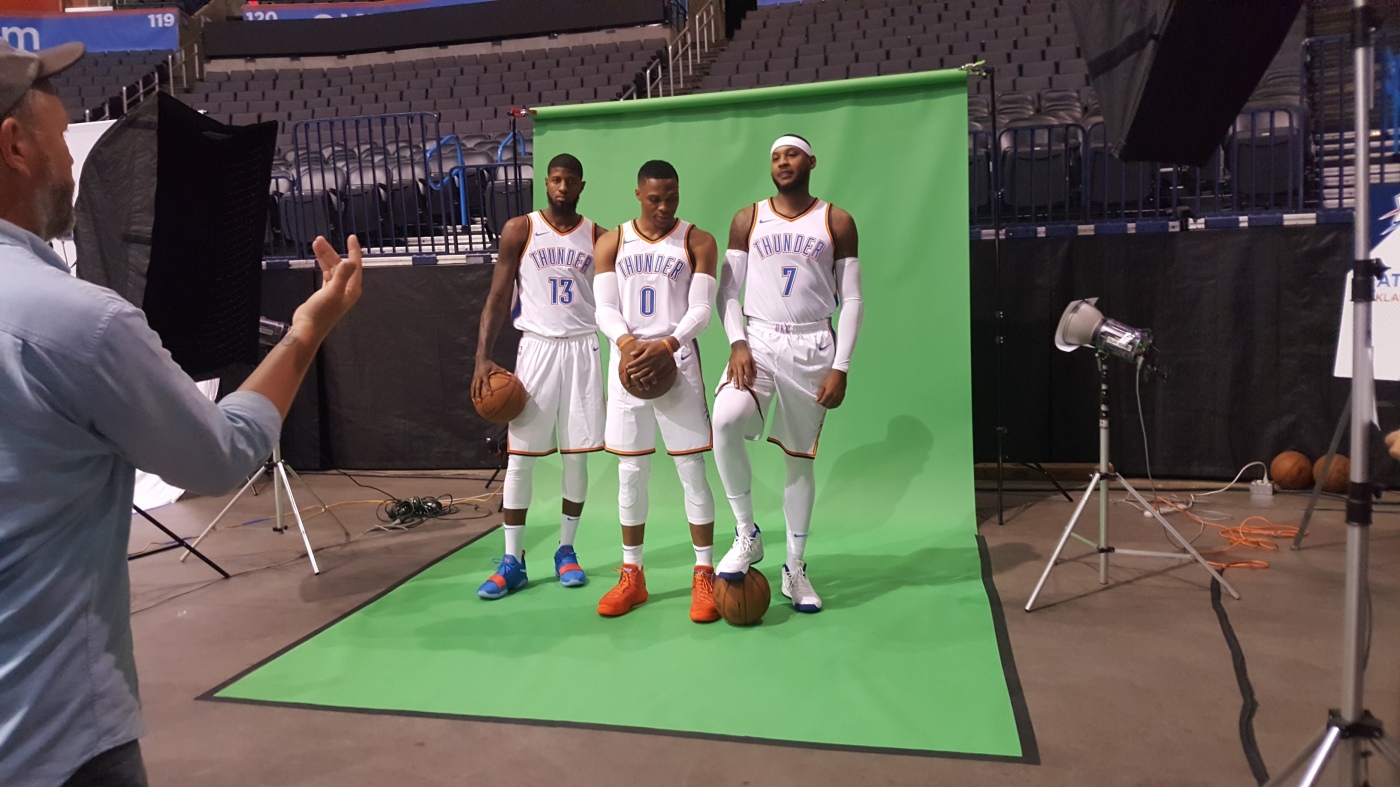 Russell Westbrook and Carmelo Anthony came out of the tunnel first Monday afternoon. Surrounded by members of the Oklahoma City Thunder staff the two new teammates walked to the center of Chesapeake Arena floor laughing and joking with each other.

A few minutes later, Paul George joined Westbrook and Anthony as they prepared to take photos during the annual Thunder media Day. It was the first moment those outside the organization got the first full look at the new Thunder Big 3.

“Amazing, man. To be able to play with those two guys and the rest of the guys we have is amazing, man,” Westbrook said. “I’m excited. I’m looking forward to making a great run, and I’m happy they’re here.”

While the addition of George and Anthony to the Thunder roster has been the talk of the NBA this offseason, many are skeptical they can pull their talents together in time to make a serious run at a title.

But Anthony, who came to Oklahoma City from the New York Knicks via trade Saturday, tried to disperse those fears in his first public comments.

“At the end of the day, it’s basketball,” Anthony said. “I didn’t want to come here to try to outshine Paul or Russ and vice versa. We’re trying to win basketball games, and by any means necessary, we’re going to do that. I’m going to bring my skill set to this team, to this organization, and that’s what I’m here for. I’ve always been kind of a product of my environment and being able to just be a chameleon in the sense of just blending into my situation and making that situation work, whatever it calls for, whether I was with the New York Knicks, whether I was on the USA team, and even here in Oklahoma.”

One of the reasons many believe this trio can work well together is that fact they seem to all want to be in Oklahoma City, at least for this season.

George had no say in coming to the Thunder since he was part of a three player trade from Indiana in the final year of his contract. But he’s saying all the right things to show he wants to help Oklahoma City return to being a title contender.

“We get criticized a lot for being friendly and not being able to do it alone. Honestly, in this league, it’s hard to do it alone,” George said. “You know, Russ averages a triple-double, and, you know, he couldn’t get out of the first round. That’s a special talent and a guy that did everything he could to win. But you just need, you know, you need guys of that stature and that level to be able to help and create something special. It’s just that era where you’ve got to face teams that are going to have two or three guys that can take over games and be iconic to this league. So, I do. I do think you have to have that to compete in this league.”

In Anthony’s case, initially he only placed one team on his list of franchises he would accept being traded to. But after a conversation with both Westbrook and George, he added the Thunder, along with Cleveland. A day later the trade was complete.

“We sold it. We sold the heck out of it,” George said. “I told him about the ponds that I’ve been on. The fish I’ve been catching out here. No, we’ve talked. We’ve had long conversations. Not even knowing this would be the destination we end up, but just speaking or talking about the possibility of playing alongside one another in the NBA. We’ve had these conversations being on the Olympic team of playing alongside one another.
“So when I got traded here and found out that he wanted to change his destination, and, you know, we reached out to one another,” George continued. “We started talking and trying to figure out how we can make this work to get him here.”

The recruitment of Anthony, 33, took place on when no one thought it could happen. Yet, Sam Presti found away to land one of the best scorers in NBA history in exchange for Enes Kanter, Doug McDermott and a second pick.

Thunder fans can thank Westbrook, like with most things, in the end for landing the 10-time all-star getting the Big three together.

“You know, Russ doesn’t really do the convincing. He came to New York and played pick-up at my gym. I saw him in Paris at fashion week,” Anthony said. “Me and Russ became close over the years. He was a big part. He was a big reason why I wanted to come here. To see his loyalty to the city, to this organization, what he was able to do on the court. I wanted to be a part of that.”