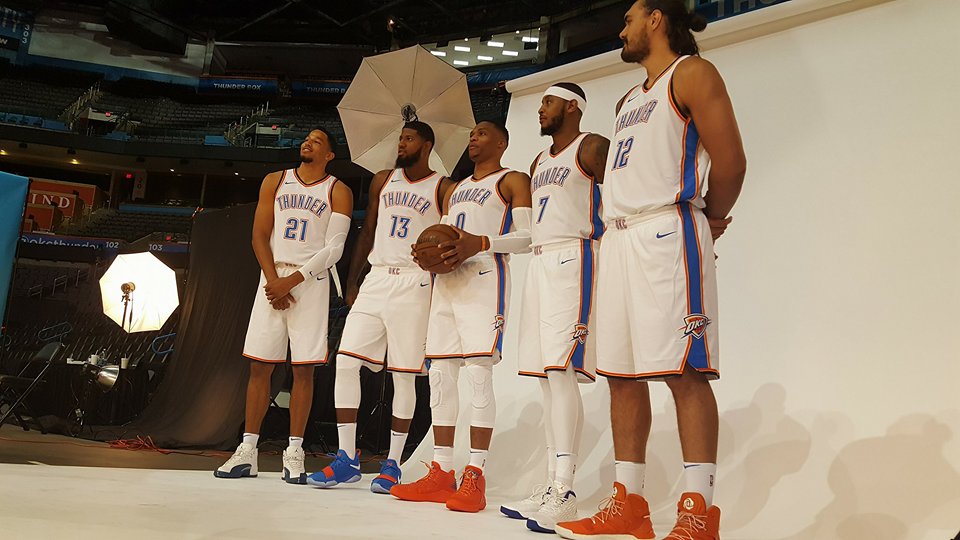 Once again Russell Westbrook does it way.
After an offseason of Oklahoma City fans asking when the fiery point guard would sign the contract extension from the Thunder, he waited until no one was looking to pull out his pen and sign the papers.

Westbrook signed a 5-year, $205 million extension with Oklahoma City Friday afternoon. It occurred on a day when the Thunder had no practice and no media members were around.

However, according to a statement released by the Thunder, it was never in doubt.

“I’ve said it before, and I’ll say it again, there is no place I would rather be than Oklahoma City,” said Westbrook. “I am so honored to have the opportunity to continue my career here with the Thunder. From day one the support that Mr. Bennett, Sam, Troy and the entire organization have given me and my family has been incredible, and we are so grateful. When you play in Oklahoma City you play in front of the best fans in the world, I’m looking forward to bringing everything I’ve got, for them, this city and for this organization. WHY NOT?”

Many observers thought Westbrook would wait until after the 2017-18 season ended and sign next summer so he can see what other free agency moves General Manager Sam Presti could make.

However, after bringing both Paul George and Carmelo Anthony to the team this offseason, if Westbrook had any questions, they may have been answered.

For Thunder officials, there weren’t any questions. They knew they wanted Westbrook to lead the franchise into the future. Coming off an MVP, record breaking season, the fate of the organization seemed to rest on his decision.

“Russell represents everything we could have ever hoped for when building a basketball team for Oklahoma City,” said Thunder Chairman Clayton I. Bennett. “His character, integrity and relentless drive have been a great unifier that has deeply and positively affected the spirit of our fans inside our arena, in our classrooms and in our neighborhoods. We recognize and deeply appreciate Russell’s rare and unique abilities as he leads the Oklahoma City Thunder, but also understand his presence and impact on our community will be felt for decades to come. On behalf of the entire Thunder organization, our ownership group and all of Oklahoma, I want to express my deepest appreciation to Russell and I know that the very best days for the Thunder are yet to come.”

Westbrook’s signing also means something else. He is the first major star in the NBA to resign with a small market in this new era of super teams. Other A-list, franchise level players have made their way to major markets such as Miami, Cleveland, Chicago, Los Angeles and Oakland.

With Westbrook resigning with Oklahoma City, it shows small markets can keep their talent. When Kevin Durant left last year, that was not the consensus thinking around the league.

It also hasn’t gone unnoticed that Westbrook chose to sign the extension on Durant’s birthday.

“Russell’s commitment to the Thunder organization since its inception in 2008 has helped propel us to great heights and stare down great challenges over our first decade,” said Presti. “We are extremely fortunate to have an athlete, competitor and person such as Russell wear the Thunder uniform. To have him cement his legacy as a leader as we enter into our 10th season in Oklahoma City is extraordinary. I am extremely grateful to Russell, his family and to our ownership for the commitment and support that they have demonstrated in supporting our vision for the Thunder.”