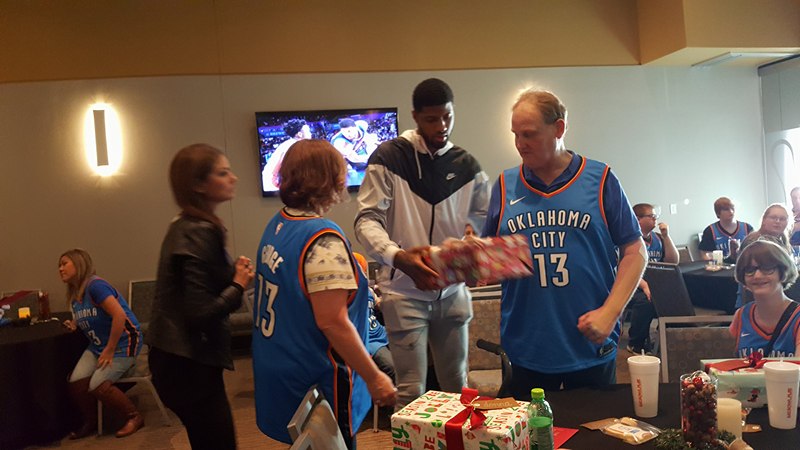 OKLAHOMA CITY – On Sept. 29, Marcus Scott had a stroke. The husband and father of two were at his Guthrie home when it occurred while his wife, Daune, was at work.

Daune Scott knows if she hadn’t trained her daughters, Sparkle (15) and Honey (12.)., on how to deal with medical emergencies, they may have never seen their father again.

“They called 911. So I wasn’t even there when it happened,” Daune Scott said. “If they had not know what to do, he probably would have died. If they wouldn’t have called 911 when they did, he wouldn’t be here.”

For Oklahoma City Thunder forward Paul George, that feeling of helplessness is one he knows all too well. When he was 6 years old, his mother suffered a stroke. He came home to find an ambulance and not knowing what was going on.

“She had a stroke, she had two blood clots,” George said. “There was uncertainty that my mom was going to make it.”

George’s mother did survive, but it led him to become an advocate for stroke victims and their families. According to the American Heart Association and the American Stroke Association, heart disease is the No. 1 killer of people in America. Strokes are No. 5.

“I think about this a lot,” George said. “I’ve been in these kids situation. Just not know what’s going on, what happened. Want to be there for them, be there for the stroke victims. This is a very important and very sensitive topic for me. It’s something that is dear to my heart.”

Sunday George and the Paul George Foundation hosted the inaugural PG Christmas Celebration for Families Affected by Stroke. It was held at the Main Event entertainment center in Oklahoma City.

Along with the American Stroke Association, George hosted seven stroke survivors from around Oklahoma and their families. That included the Scott Family, who are still dealing with the emotional and financial toll of the stroke.

“It went from a two family income to a one,” Daune Scott said. “I wait tables at a restaurant, so it was really hard. He was our main breadwinner. So you have bills, car payments, everything. The kids took it hard because they were at the house when it happened. It was really hard on them. They still have a hard time with it.”

For Oklahoma City’s Darrell Bradley, who suffered a stroke Sept. 29, 2016, he hopes George can get more people to understand that survivors of strokes can still lead productive lives.

“People should know our minds still work,” Bradley said. “We are still capable of most things. A lot of times people treat us like there is something wrong with us mentally and there is not.”

The Christmas Celebration included George playing pop-a-shot and laser tag with all of the families. George said the fact he has a pop-a-shot at his home gave him a decided advantage.

George then handed out gifts to everyone. They included his signature Nike shoes, the PG 1, jerseys, Nike basketballs, Thunder tickets and Visa gift cards.

For Honey Scott, getting to meet George was her favorite gift. But shooting him a lot in laser tag is a close second.

“It was technically my dream come true because he is an amazing person,” Honey Scott said. “He is awesome and has a great personality.”

According to the Paul George Foundation, George has partnered with the American Stroke Association, Central Oklahoma to create incentive programs in support of stroke preventive programs which will be announced in January 2018. He has served as national spokesperson for the American Stroke Association’s F.A.S.T. campaign, educating the public on how to spot a stroke and what to do when one occurs.

Because George is so passionate about caring for stroke victims and their families, it was an easy choice to use his day off after a long road trip to make a difference in the lives of others.

“It’s bigger than basketball,” George said. “It’s bigger than having a day off. That doesn’t come to mind. It’s doing something impactful. It’s about family. This touched home. It’s big in my hear Just want to help out.”