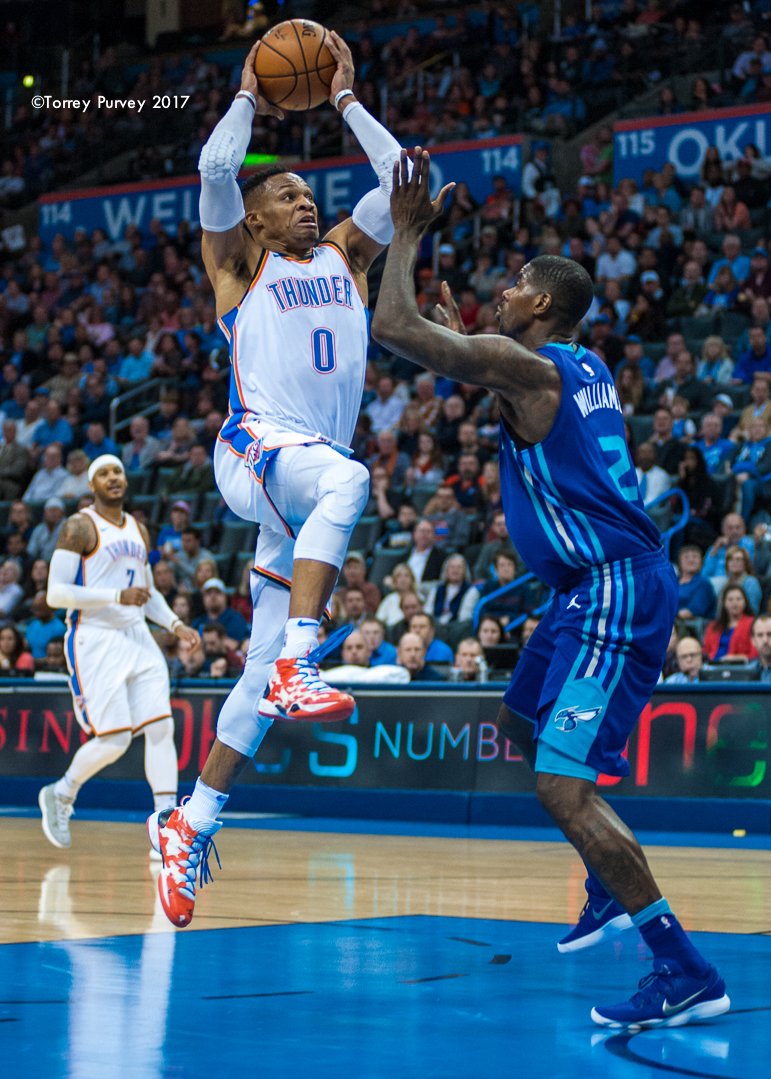 There wasn’t really much Oklahoma City could say. Their 116-103 loss to the Charlotte Hornets Monday at the Chesapeake Energy Arena was ugly and everyone knew it.

Yet, Oklahoma City coach Billy Donovan tried to put a positive spin on a night in which another team came into the Thunder house and rolled over them.

Through 26 games, the Oklahoma City players, coaches and fans all know this team should be better. Yet, they keep dropping games in a manner that doesn’t fit the talent on the roster.

Unfortunately, for the Thunder, it has become an all too common occurrence.

In the last two weeks, Oklahoma City (12-14) has lost games to Orlando, Dallas, New Jersey and Charlotte. The four franchises are a combined 38-68 on the season. None of them have a record over .500.

“We can say we’re going to figure it out,” Thunder forward Paul George said, “we can say all that, but at some point, it’s got to stop.”

Against theHornets,  the Thunder followed one of their familiar scripts. They got down big early, only to fight their way back into the game.

However, in the past, those games would stay close and the Thunder would win or lose in the final minutes.

That was not the case with Charlotte. The Hornets outscored the Thunder 40-22 in the third quarter to blow the game open. There was no miraculous comeback on the schedule.

“Certainly the third quarter, defensively, really hurt us I think there was one stretch there where we fouled a three-point shooter twice and then we gave up a [Frank] Kaminsky three and those 10 points were crucial in the game, it changed the momentum,” Donovan said. “The third quarter for us, defensively, was tough, I don’t think that’s who we’ve been on defense for the entire year. I don’t think that quarter was indicative of who we have been.”

The Thunder went on a 20-2 run in the fourth, but it was too little too late.

“Obviously, with the level of talent that we have, we never feel like we’re out of a game,” Oklahoma City’s Josh Huestis said. “It definitely makes it more difficult. You can’t fall into the trap of feeling defeated when that happens. Games are long and I’ve seen crazier things happen. You just have to stay in it.”

A rejuvenated Dwight Howard paced theHornets  with 23 points and seven rebounds. Kemba Walker added 19 while Marvin Williams chipped in with 18. All five starters scored at least 14 points for the 16th highest scoring team in the league.

Russell Westbrook led all scorers with 30 points on 10 of 22 shooting. He also collected seven boards and three steals.

In his first game back after a two-game absence, George posted 20 points to go along with five rebounds and four turnovers. Carmelo Anthony shot 5 of 12 for 11 points.

The strain of the season may finally be showing on Anthony as he left the arena without talking to the media. It’s the first that that has happened since he arrived in Oklahoma City.

The Thunder have a three-game road trip starting Wednesday in Indiana. There is no telling which team will show up on any given night. And that may be their biggest issue right now.