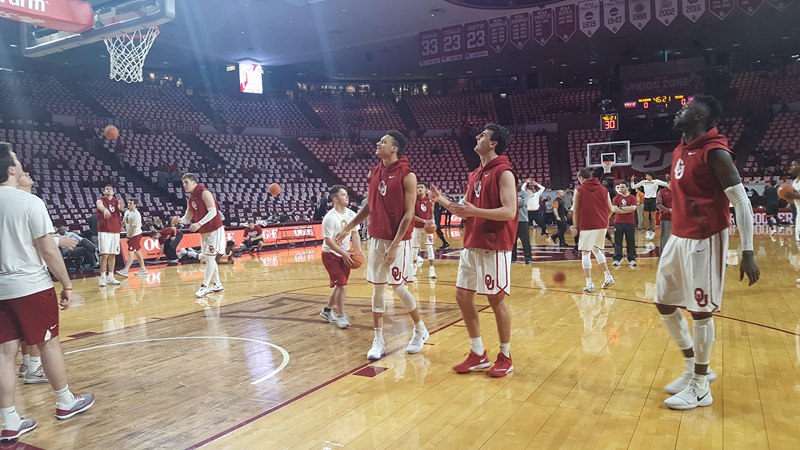 NORMAN– Oklahoma is in a funk. There is no simpler way to put it.

But if any team was going to rouse the Sooners out of their slumber, it would be the Longhorns, who had already knocked Oklahoma earlier in the month.

However, even the heat of Red River Rivalry wasn’t enough to shake loose the cobwebs as Oklahoma fell 77-66 to Texas Saturday at Lloyd Noble Center.

The loss is only the second defeat at home this season. However, both have come in their past two games in Norman.

The tailspin that has taken over the Sooners season has watched them go from one of the most exciting teams in the country to fans wondering if the team can hold on to what was a sure NCAA tournament bid.

Player of the year candidate Trae Young had a solid game by most players standards. But the 26 points (7 of 21), 5 rebounds and 7 assists are far below what has become expected of the freshman phenom.

“When you win a game in the Big 12, that’s big,” Young said. “Like I said, the toughest conference in America. I’m getting guarded like nobody else in the country is being guarded. Scouted on like no one else in the country is. It’s a mystery coming out each and every game, trying to figure out how a team is going to guard me and how I’m going to dictate how my team wins.”

Christian James scored 11 points and was the only other OU player to reach double figures in points.

The shooting woes that have plagued Oklahoma during their losing streak was once again their downfall against Texas. As a team they connected on 20 of 65 shots for a 30.8 clip. They also hit only eight of their 30-point attempts.

For whatever reason, the Sooners have turned into a poor shooting team and they haven’t found a way to break out of it.

Just like in their first encounter, the Longhorns inside presence had an immediate impact on the contest. Dylan Ostetkowski and Mohamed Bamba attacked the backboards on both ends of the court and out-muscled the Sooners.

But Oklahoma was its own worst enemy in the first half. Midway through the half they were shooting 19 percent from the field.

Despite that, Oklahoma only trailed 32-29 at halftime.

While the Sooners were shooting poor from the field, their one saving grace throughout was their ability to get to the free-throw line. For the game, OU made twice as many shots (18 to 9) from the free throws than Texas.

The Sooners never led in the first half. But in the second half, they had several opportunities to not only tie the game but grab their first lead.

However, bad shots, turnovers kept them from taking advantage of solid defense in the first eight minutes of the half.

The Longhorns extended their advantage to 55-44 with 9:30 left in the game. The Sooners were unable to make a serious threat the rest of the contest.

“It was a ballgame where I thought Texas had more pop from the start,” Kruger said. “I thought they dictated in the first half. We tried to make a little run there in the second half and couldn’t get over the hump. Seemed like we were fighting uphill all day.”

Oklahoma will look to end its five-game losing streak when they travel to Kansas for a big Monday matchup in Lawrence.

“It’s just a process. I mean, it’s a process,” Young said. “And right now, it’s tough. I know no one likes losing, especially us.”

Michael Kinney is a Freelance Content Writer with Eyeamthetruth.com