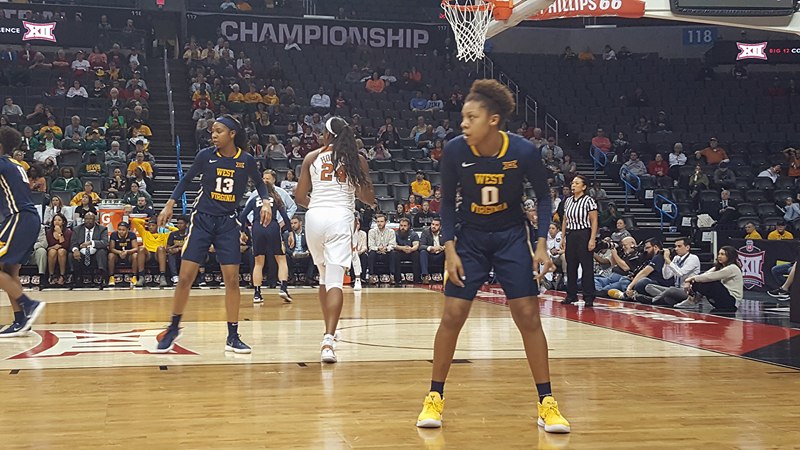 OKLAHOMA CITY — Mike Carey is a straight talker. The WVU coach doesn’t sugar coat his answers when he is unhappy with his team’s performance or much less anything.

However, even Carey seemed to be at a loss for words Sunday night when he was asked where does his team now stand when it comes to getting a bid to the NCAA tournament.

The question came after Carey’s Mountaineers were eliminated from the Big 12 Championships with a 68-55 loss to No. 2 seed Texas.

Not only was the loss the third of the season to the Longhorns, WVU didn’t look a team that could compete at any point. That is not the impression they wanted to give off as they try to sneak into the NCAA tourney.

“The difference is I felt like we played with less heart this game,” senior point guard Chania Ray said. “Some people came to play and some didn’t and it’s not all about offense — everybody can play defense the whole game and I think that’s just one thing we lock lacked. Other than that it was the same team, same game, minus a couple, but we just didn’t dig within ourselves to pull through.”

Carey didn’t totally agree with Ray that some players didn’t come to play. However, the team didn’t do themselves any favors with the style they tried to play.

“I don’t think they didn’t come to play. I think at times they didn’t listen tonight. We can’t stand out there and keep shooting threes,” Carey said. “Our legs are tired. Like players said, every timeout, every time down I tried to run quick hitters that were driving and getting to the thing, but we kept shooting threes. We could have got a three anytime in the shot clock. But we were taking it early in the shot clock and like they said we were hitting the bottom of the rim which led to layups for them on the other side.”

The women’s Basketball Committee will reveal its 64 team field March 12.

After going 1-1 during the Big 12 Championships, WVU ran its record to 21-11. That gives them the third-best overall record in the conference.

Even though the Big 12 has four teams with at least 20 wins and another one game away, the conference doesn’t have the notoriety or respect of some of the other major conferences this season. Carey says that will be taken into account by the NCAA selection committee next week.

“I’m not sure what the RPI for the league is, but I know it’s not great, and that’s why,” Carey said. “I think if you saw the Big Ten last year they’re third place team didn’t go because of their RPI of the league. It comes down to that, mostly.”