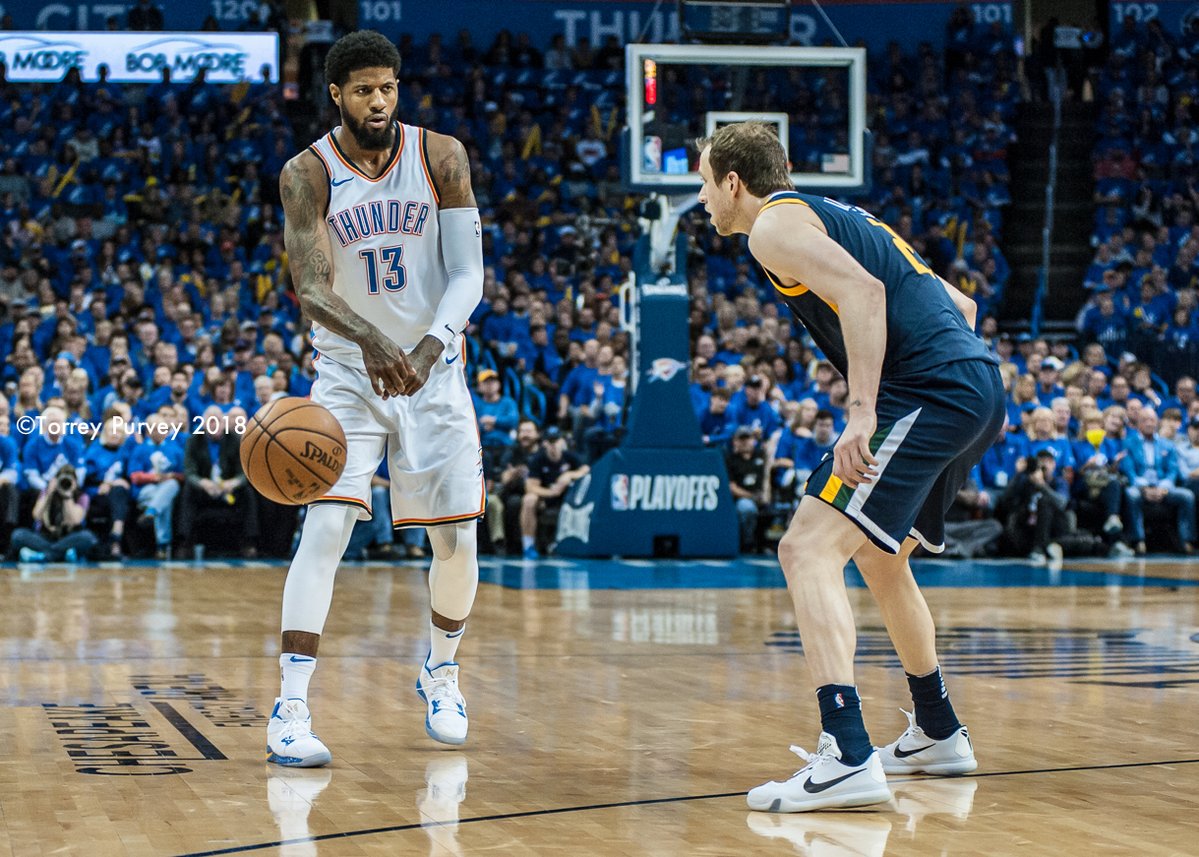 OKLAHOMA CITY –Russell Westbrook and Carmelo hadn’t heard it before. Even though thyey had been teammates with Paul George for the entire regular season, the nickname Playoff P came as a surprise to them.

However, after the performance George put on Sunday in Game 1 of their first-round series at the Chesapeake Energy Arena, they didn’t try and deny it fit.

“When he’s aggressive, it changes the game for us, as you saw tonight,” Westbrook said of Playoff P. “Like Melo said, he got it going. Our job is to make sure we find him and make it easy for him. As long as he stays aggressive, miss or make, we’re a better team.”

In his first playoff game with Oklahoma City George scored a game-high 36 points on 13 of 20 shooting to lead the Thunder to a 116-108 victory over the Utah Jazz.

George hit eight of the 11 three-pointers he attempted to set a new Thunder playoff record for made 3s in a game. He also tacked on seven rebounds in 38 minutes of action. George was taken out the game with a minute left due to a hip injury.

Rookie Donovan Mitchell paced the Jazz with 27 points on 11 of 22 shooting. He also posted 10 rebounds in his first playoff game.

“I think it is what I expected, at least for myself,” Mitchell said. “You know the physicality was there, playing through certain things, fighting for rebounds, and just being more aggressive. I think the last Portland game that we had really kind of gave us a test to what playoff basketball was going to be like, and I think as a team we were all ready.”

Utah had six other players score in double figures. Rudy Gobert led them with 14 points and seven boards.

The night didn’t start out very strong for the Thunder. After Westbrook threw down a monster dunk for the game’s first points, the Jazz went on a 14-2 run.

It looked like Oklahoma City was about to be in some serious trouble before they calmed the waters and had tied the game at 25-25 at the end of the quarter.

“We just calmed down. We had to play our game, you know,” Corey Brewer said. “They kind of came out and hit us in the mouth you could say, but we calmed down and came out and played the way we should play the whole game.”

Oklahoma City’s big three carried the bulk of the offensive load in the first half. Westbrook, George and Anthony combined for 43 points to give the Thunder a 54-48 halftime lead.

Mitchell was the only member of the Jazz to cause the Thunder fits in the first half. He got some help in the third quarter from Ricky Rubio, Joe Ingles and Jae Crowder.

However, Utah took a huge hit when Gobert picked up his fourth foul with 5 minutes left in the third quarter.

But none of that really mattered. The third quarter was all about George, who scored 11 points in the quarter, including a dagger as the buzzer sounded to give the Thunder had a 9 point advantage heading into the fourth quarter.

“You know I thought throughout the course of the game, I just took what they gave me,” George said. “Kind of what I talked about coming into this is not being indecisive. They are going to give me perimeter shots or midrange shots and just take them and just be decisive on setting it up and looking for those opportunities.”

With Mitchell on the bench, Utah was unable to find any consistent scoring. George and the Thunder bench took advantage as they pushed their lead to 15.

By the time Mitchell returned, it was too late. Oklahoma City was on a roll and there was nothing the Jazz could do to slow them down.

“Yeah, he hurt his foot. He had some soreness in his foot. They went back and X-rayed him, and they said he’s okay. Doctors cleared him,” Utah coach Quinn Snyder said. “So I put him back in the game, and then when I saw him, it looked to me like he was feeling a little bit, and we just wanted to make sure, so I took him out and kind of confirmed it, and then he went back in, and then at that point we felt like it was going to be difficult for us to win the game, and we subbed again, subbed a number of guys.

But it was too little too late as Oklahoma City made just enough free throws down the stretch to fend off Utah.

Utah came into the postseason with many believing they had the top defensive unit. But Oklahoma City showed what they can do when they are hitting on all cylinders. But they know they must continue to improve in Game 2 Wednesday.

“We had a slow start and got to dribbling and rushed shots. They started off hot, and I thought we responded very well for the rest of the game being physical and executing our game plan,” Westbrook said. “That’s all we have to do moving forward. This game is done. We didn’t do anything special. We won a game at home. That is what you’re supposed to do and then get ready for the next one.”

Michael Kinney is a Freelance Content Writer with EyeAmTruth.com