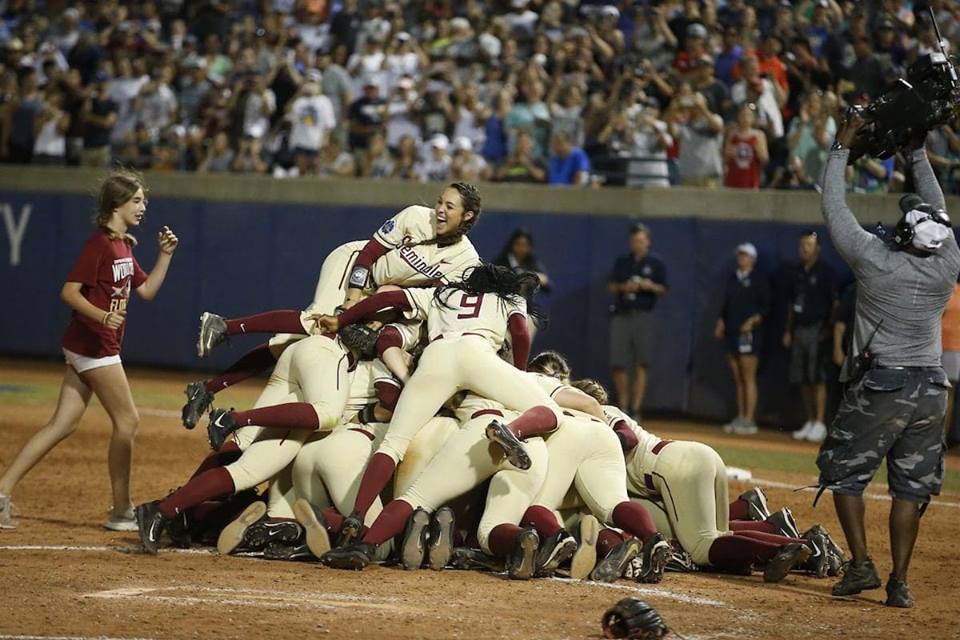 OKLAHOMA CITY –  Sydney Sherrill grew up a few miles away from USA Hall of Fame Stadium. In fact, as a freshman in high school, she won her first state championship in the same location.

So when Sherrill found herself five years later on the same field holding up her first national championship, it was a surreal moment for the Florida State freshman.  A moment no one outside Tallahassee saw coming.

“It feels amazing. This is a dream come true for me and my team,” Sherrill said. “We knew we could do it. But we really fought this whole entire tournament really. It’s been so incredible. I really can’t describe it. I’m just so happy to be here. I really am.”

No. 6 Florida State defeated No. 5 Washington twice in the championship final of the Women’s College World Series (May 31-June 5) to not only win its first-ever national championship, but also the first for the ACC.

The Seminoles used the long ball and dominant pitching to sweep the Huskies in two games by a combined score of 9-3 (1-0, 8-3). It’s the sixth time since 2010 that the series was won in a sweep.

“We learned how to fight from the ACC Tournament on, and I give credit to the team and the girls,” FSU coach Lonni Alameda said. “ As much as that comes from our culture and our coaching staff, they have to buy in and they’re the ones that have to implement it. And our lesson from last year from Team 34 was to have a little more fun. Last year’s team was amazing. We did everything right, but we forgot to celebrate the little things. So this year we celebrated everything and we had a blast with it. I’m so proud of them and thankful for the lessons I learned from every team to be able to move them forward.”

The 2018 WCWS field several big name programs that had won titles or made deep runs in the tourney before. That includes the two-time defending champion Oklahoma,  two-time winner Florida and No. 1 UCLA.

But it was the young Noles who outlasted all of them.

“I think starting in postseason we really bought into the one-pitch mentality. We didn’t take a pitch off. Although we did have the 8-3 lead, still one pitch can change this game,” said Jessie Warren, who was named the MOP. “So we have to focus on this one pitch and stay in it because the moment you let up on the momentum, it carries away. So I think the girls and myself did a really good job taking those breathers when we needed the breathers, taking a step back and soaking it all in and having fun.”

Just to get to the championship series, Florida State took the long road. They lost their first game of the tournament to No. 3 UCLA and automatically dropped to the loser’s bracket.

In the finale, the pitching of Meghan King and a solo homer from Anna Shelnutt was enough for FSU to shutout UW 1-0.

In Game 2 of the series, it looked like the Huskies were going to force a winner-take-all Game 3.

On King’s first pitch of the game Washington’s Taylor Van Zee lifted a single into centerfield. King then threw a wild pitch that sent Van Zee to second.

The Huskies Sis Bates laid down a bunt and FSU catcher Dani Morgan tried to throw her out at first, but the ball got past Carsyn Gordan and rolled into right field to allow Taylor Van Zee to score.

Julia DePonte then popped up a flyball that the Seminoles were unable to handle. UW had two runners on base and no outs.  A sacrifice fly from Noelle Hee plated another run.

By the time the Huskies were done batting they had a 3-0 lead against a stunned FSU squad.

But the Seminoles stormed back in the bottom of the inning when sophomore Anna Shelnutt hit a 2-run homer. It was her second homer in two days.

The homerun came one play after UW pitcher Taran Alvelo thought she had struck out Shelnutt and was walking toward the dugout before she saw it was called a ball.

Alvelo was back in a jam in the second inning when she put two runners on base. Freshman Elizabeth Mason hit a shot into rightfield that Trysten  Melhart misplayed. Two runs scored giving the Seminoles their first lead.

Gordon drove in another run to push the advantage to 5-3 after two innings.

In the fourth inning, Washington had two runners on base and two outs. Melhart hit a comebacker to King, who was unable to field it. That loaded the bases and was UW’s best chance to get something started.

Unfortunately for the Huskies, Kelly Burdick grounded out to second baseman Sydney Sherrill to end the inning. Mason cranked out a 2-run homer in the fourth inning, which knocked Alvelo out of the game.

“I feel like as softball players there are days you’re on and days you’re not,” Alvelo said. “It’s not like I felt like anything was off. I got emotional. It’s the championship series. I felt like I didn’t give my seniors the best chance to win that game.”

UW freshman Gabbie Plain entered the contest and promptly gave up a solo homer to Warren to put the contest away.

“Unfortunately I think we just kind of ran out of gas,” UW coach Heather Tarr said. “Things happened this day because of things you get to do and you accomplish way beforehand. Whether that’s in your off-season or your fall time and that kind of stuff. So you wish you could have held the lead in those kind of things, but it wasn’t today that ended up, oh, we lost 8 to 3 or whatever the heck the score was. It was lost before we could win it.”

The Noles will lose the likes of Warren and Morgan Klaevemann from its championship squad. But the bulk of its starters will be back next season to defend their crown.

And now that they have gotten a taste of being the best, it doesn’t sound like they are ready to give it up anytime soon.

“I came into this program as a kid, and I’m leaving a strong woman that wouldn’t have wanted it any other way because this coaching staff cares for you as a person, not just a player,” Warren said. “You leave this program so much better than you came into this program, and they prepare you for life. I’m so happy I chose Florida State. And I said it before and I’ll say it again, I’ll bleed garnet and gold until the day I die. I love Florida State.”

Michael Kinney Kinney is a Freelance Content Writer with EyeAmTruth.com