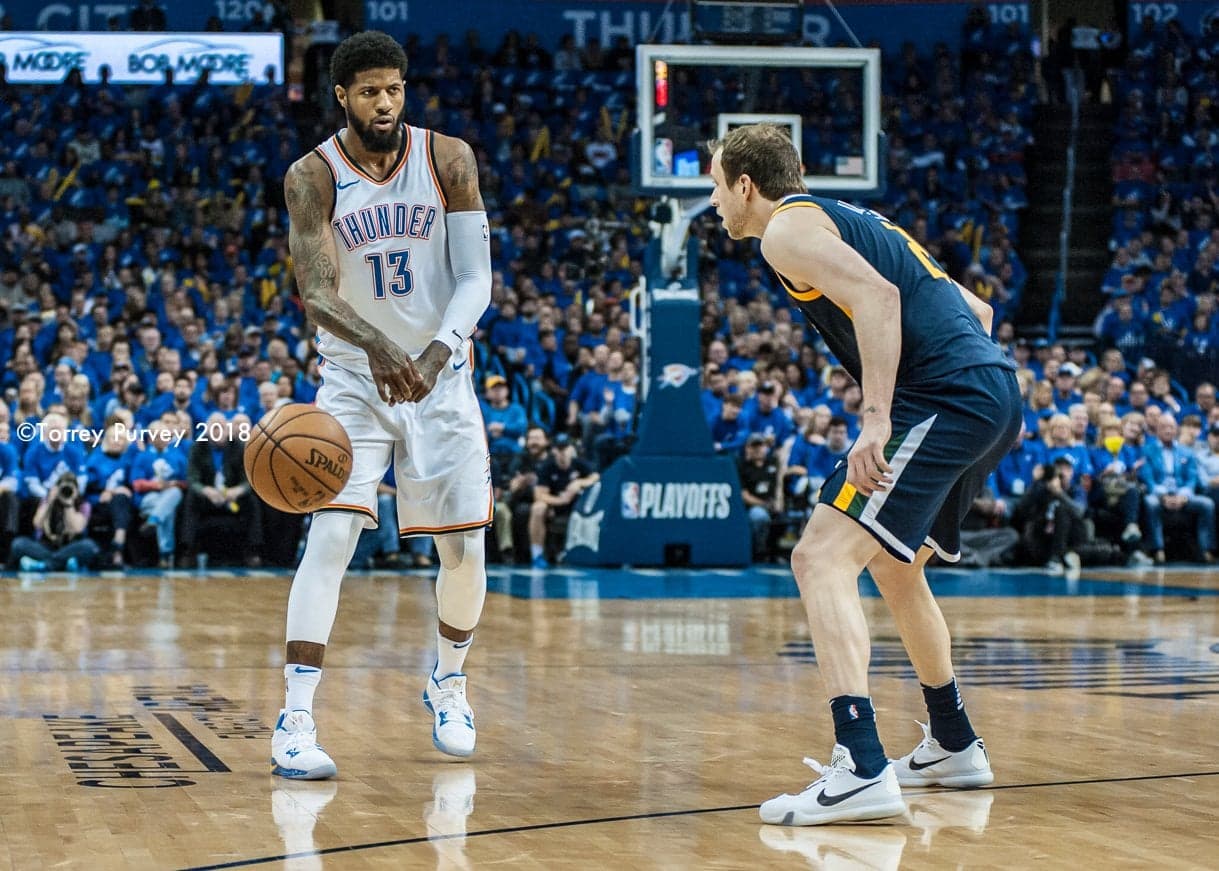 When Oklahoma City’s 2018-2019 season is made into a documentary or at least a highly stylized highlight package, there can only be one name for it: “Scared money don’t make none.”

When Thunder General Manager Sam Presti quoted this A Tribe Called Quest lyric during an ESPN free agency special on Paul George, it summed up the team’s new aggressive mindset when it comes to going after players.

It proved to be successful late Saturday night when George announced he would be resigning with the Thunder. While attending a party being thrown by Russell Westbrook in Arcadia, George stood on stage and told the 500 invited guests exactly what they wanted to hear.

“If y’all don’t quite get it, let me say it again,” George told the crowd with Westbrook strutting behind him. “I’m here to stay.”

The guests were then treated to a concert from hip-hop legend NAS as George and Westbrook celebrated with the rest of the Thunder organization.

According to reports, George will sign a 4-year max contract worth $137 million. He holds the option after the third year, which could allow him to resign again and push the total value to a seven-year deal worth $290 million.

When the news broke that George was going to be staying, fans lost their minds and acted as if they had just won an NBA title. In his one season with Oklahoma City, the forward averaged 21.9 points, 5.7 rebounds. 3.3 assists, 2.0 steals and shot 40 percent from 3-point range.

This is not the position most NBA analyst thought the Thunder would be in when they traded Victor Oladipo and Domantas Sabonis to Indiana in 2017 for George, who had just one year left on his contract.

The prevailing theory at the time was that George was just going to be in Oklahoma City for one season. That the native of Los Angles had his eyes locked on returning home and playing for the Lakers.

But Presti and the entire organization weren’t going to let him get away without a fight. From the moment he became part of the team, George was slowly pulled into the Thunder culture and seemingly grew closer to Westbrook.

At the end of the year-long recruitment, George has become the one thing the franchise never had: A big-time free agent who chose to be in Oklahoma City.

Presti had been able to pull off miracle trades and turn draft picks into future MVPs. But to get a player the caliber of George, in his prime, to choose the Thunder when they had other options had eluded him until now.

Hours after George announced he was staying, the Thunder came to terms with free agent Jerami Grant. The 24-year old will sign a three-year, $27 million contract to return to Oklahoma City.

Up until LeBron James chose to make the Lakers his new home, the Thunder had owned the free agency period just by keeping its core team intact.

However, it does come at a cost for the Oklahoma City owners. The team’s salary will reach more than $157 million dollars. The salary cap is ‘only’ $101.8 million.

Because Oklahoma City has gone over the salary cap line in the past, their luxury tax for the 2018-19 season will be just under $138 million. That is a total payout of almost $300 million. It will increase with every free agent they are able to sign.

Yet, Presti and the Thunder knew this was a distinct possibility when they traded for George and Carmelo Anthony last year. The fact they are willing to pay that type of money now when they wouldn’t back in 2012 with James Harden show just how much the league has changed in those six years.

Oklahoma City still has a few questions left unanswered. What will they do with Anthony and his contract? The fact he was not at the party Saturday says a possible buyout is looming.

Also, will the Thunder bring back Raymond Felton and Corey Brewer or go seek out other low-cost free agents?

But as of right now, Oklahoma City’s core is signed long-term and that is something most franchises in the league can’t say.