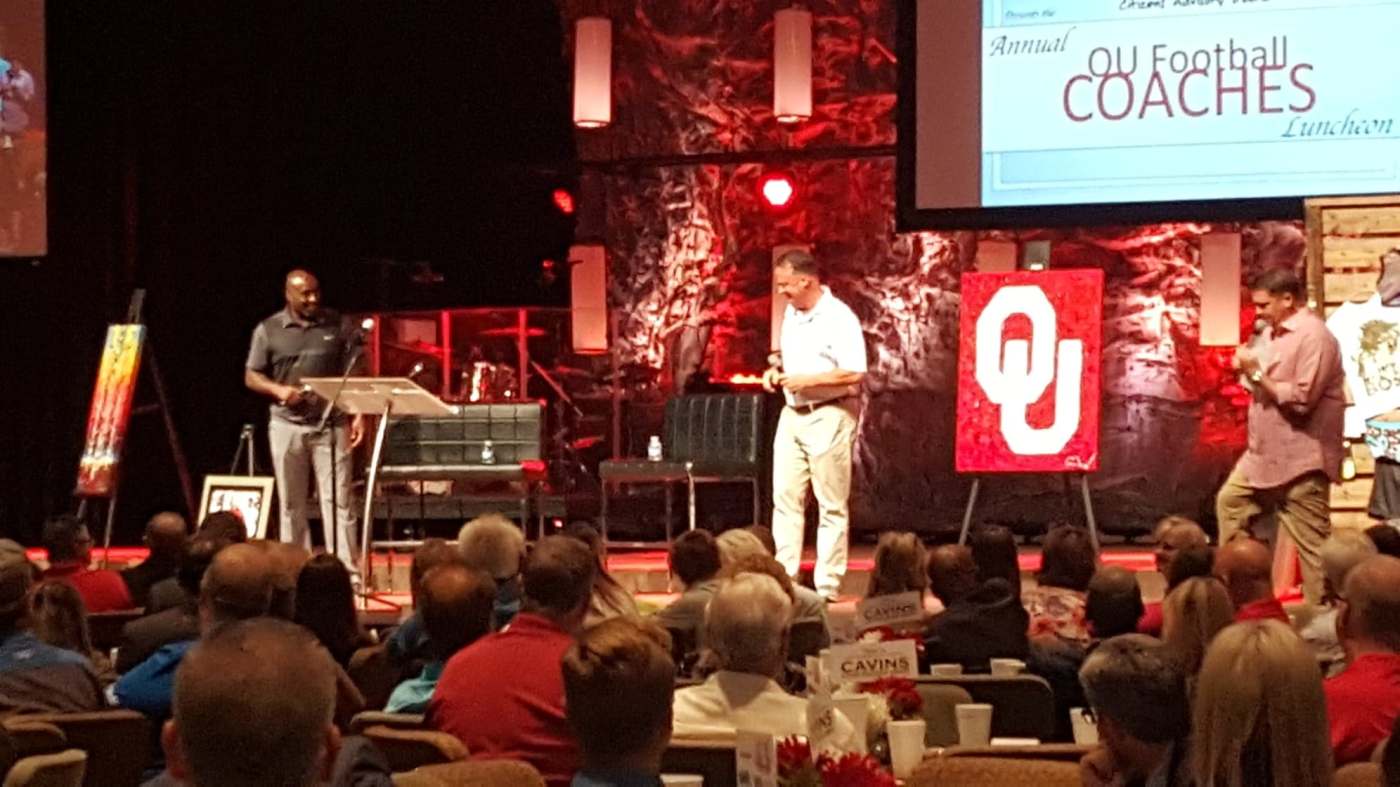 While the upcoming season was paramount on the minds of the coaches, they also took time to give an inside look at recruiting for the Sooners.

Gundy, who is also the recruiting coordinator, explained pretty simply where the Sooners stand right now in the world of college football recruiting.

Gundy can say that because the Sooners are ranked inside the top five of most national recruiting lists. Their 2019 class has 16 commits so far. They include a pair of five-stars and 10 four-star recruits.

Gundy gave much of the credit to Cooks, who has been a man on a mission this summer.

“I will give Kerry props. Everybody who has been watching Kerry getting all of these commitments, defensive back commitments all summer long,” Gundy said. “(Cooks) is the hottest recruiting in all of college football. He just keeps on getting them, one after another. I went down to him the other day and said you have to stop, we have to get some guys on our side of the ball.”

The defensive backs who have committed to Oklahoma for 2019 include Jaden Davis, Woodi Washington, and Jamal Morris. Each has a four-star ranking.

According to Cooks, one of his biggest weapons on the recruiting trail has been plain old honesty.

“I travel across the country and everybody knows OU. But to me the separator, one is our staff. This is a great staff. And recruiting is all about relationships,” Cooks said. “I think we have a staff that is honest. I think you go to some of these other conferences, we will not get into, but we are honest with the kids. We don’t lie to our kids. We tell them exactly where we see them at and our expectation for when they come to our program and that we’re going to take care of them. We take that seriously. We’re not just telling them that as a recruiting ploy.”

Gundy also credited Riley for setting the tone for the entire staff when it comes to the work needed on the recruiting trails.

“Our recruiting is as hot as it has ever been I believe. We have a fairly young staff. I happen to be the oldest guy on the offensive side now, which is hard to believe,” Gundy said. “Then you interject a guy like Lincoln Riley, who is as sharp as any coach out there in college football. As a recruiter, he does it every single day. He stays on us and we know as coaches that’s what we have to do.”

For Cooks, the Sooners new apparel and shoe deal with Jordan Brand has become a huge part of their recruiting pitch.
“The biggest separator right now, when I’m talking to kids, is the Jordan Brand,” Cooks said. “There are only four college football teams in the country that are able to wear that logo. That’s a big deal for every kid.”

However, in the world of recruiting today, social media has changed everything. It is an element the Sooners have seemed to master. From their signing videos to Riley’s eyeball emojis, Oklahoma makes good use of the medium.

However, as Gundy explained, it can have its challenges.

“In recruiting, it’s so much different than it has ever been. It’s more challenging than it has ever been, mainly because of social media,” Gundy said. “It’s really changed recruiting with players. There are some pluses and some minuses about social media. The pluses for us as coaches is you can learn anything about anyone from what they put on twitter. Everything that they tweet or, everything they say publicly is basically the type of person they are. So that helps us tremendously in recruiting. Because if we follow a young man, and we can basically tell what kind of person he is, and if it doesn’t fit the type of players we want in our program, we will just go on down the road and find another player. Because there are plenty of them out there.”

But at the end of the day, both Cooks and Gundy say that the Oklahoma brand pretty much does most of the work with recruits.

“The more better players that we bring into this program, the more depth that we have that are elite talent players, the better opportunities we will have to win 11, 12, 13, 14 games,” Gundy said. “And that’s what we want to do. We want the players that can help us win the 12th, 13th, 14th game and not guys that only help us win 7, 8 or 9 games a year. So that’s why we really have to search all over the country and when you’re Oklahoma most of the time you have that opportunity. When you knock on that door, people are going to answer.”
3rd annual ChampU BBQ

The single biggest highlight of the summer recruiting during the past few years has been the Sooners ChampU BBQ. All of the Sooners commits and their families are invited to the weekend get-away in Norman.

This year’s festivities are set for July 28, and the OU coaches are pretty geeked about it.

“We are probably expecting two/thirds of those commits to be here,” Gundy said. “Typically, when you get to the back end of the summer like we are, they are about to start their high school camps as well. So, a lot of times some of these young men like to take trips with their families for the last week or so. That would be the only reason any of our commits will probably not be here. We will have most of them here. The Sooner bar Be Que we’ve been having the last few years has been phenomenal. Our recruiting people do a tremendous job with Drew Hill and Annie Hanson and our staff. It’s really a fun event. It is absolutely a blast that we have. It shows the families and the players that yeah, we’re football coaches, but we like to have fun. And at the end of the day, if you’re going to bring your child and let him come to our school for four or five years, we’ve got to be able to take care of him 24 hours a day, regardless of what goes on.”

Michael Kinney is a Freelance Writer with EyeAmTruth.com