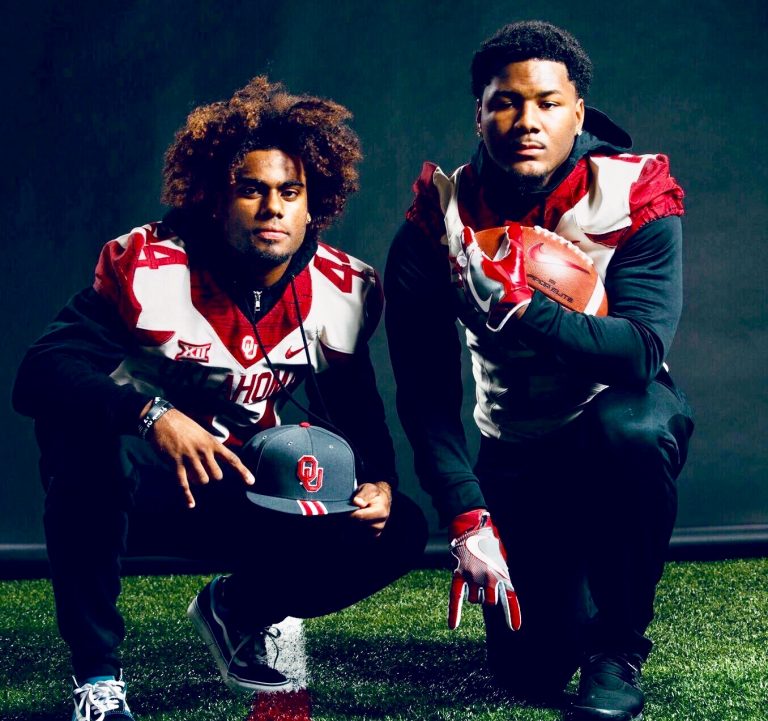 Brendan Radley-Hiles has seemingly done the impossible. Despite not playing a single down of a single football game yet for Oklahoma, the freshman from Bradenton, Fl. has already developed a folklore of sorts.

Whether it’s his teammates raving about him or Sooner fan base wanting to know more about him, the young man they call Bookie has become someone to keep an eye on, to say the least.

The Oklahoma coaches have tried to temper expectations of the 5-foot-9, 186-pound defensive back, but even they find themselves getting caught up in the Bookie hysteria.

“He just doesn’t carry himself like a freshman,” Oklahoma coach Lincoln Riley said at the OU coaches Luncheon. “It’s a little difficult to describe. You can see it though. Some guys you can tell it’s going to take them a little time. Some guys feel like they’ve been here forever. He’s certainly got that feel.”

Bookie played his high school ball at Florida’s IMG Academy, where he earned numerous honors. As a 5-star recruit in the 2018 class, he had his pick of any program in the nation. However, he turned down offers from Alabama, Clemson, Florida State, Michigan and Ohio State to travel to the middle of the country and become a Sooner.

Even before Bookie became an early enrollee this past spring, he was one of the team’s biggest recruiters.

“He is a dynamic kid,” Riley said. “I am never quick to anoint guys that haven’t played yet. So, he’s got plenty to prove. But he has some unique skills. Just kind of as a person he is one of those guys who has been big for us in recruiting. He is almost like the pied piper a little bit. Everybody knows him from East Coast to West Coast. He’s just kind of got a way about him. It’s helped us in recruiting, but where it has really helped is I think him coming in, is just the respect of his teammates. Guys are already starting to gravitate toward him. So. I think you see a great potential to be one of best leaders we’ve had run through here I the last several years.”

Secondary coach and assistant defensive coordinator Kerry Cooks is the one who recruited Bookie and knows what type of persona he brings to the program.

“We have a lot of young guys we believe are going to be exceptional. They are going to have to go through that process and learning experience,” Cooks said. “But I will say there is one guy that everybody talks about and heard about. I even joked about with coach Riley throughout the recruiting process that he had more Twitter Followers than coach Riley.”

But what has his coaches and teammates the most excited is Bookie’s playmaking ability. According to co-offensive coordinator Cale Gundy, he has similar traits to a pair of Oklahoma alums who were known for causing havoc.

“Guys that have played here over the years that were really, really successful… Roy Williams and Tony Jefferson,” Gundy said. “Bookie is kind of that type of player. The difference with Bookie is he is small. But Bookie is a ballplayer and that is something. He is one of those guys where offensively you know where he is at all times. If Bookie is over there, you are better off not going over there. You are better off going somewhere else. Very talented guy. We’re all excited about him.”

Even though Cooks said Bookie can play anywhere on the field, he sees him playing the nickel this season. With defensive coordinator Mike Stoops saying earlier in the week that OU would be playing more nickel this year, that means more opportunities for Bookie to be on the field.

Cooks and the OU coaching staff have nothing but high expectations for Bookie.

“I’ve been doing this for 17 years now, and I’ve coached several first round players. I am not putting this on him, I’m not saying he’s going to be a first-round NFL draft pick,” Cooks said. “But from those guys that I’ve coached that were first-round draft picks and still playing I the NFL today, for him to be a 17, 18-year-old man, he is far and away the most mature kid. He’s got great leadership, he’s got a great foundation at home. He is just a natural playmaker. That’s a lot to ask for a true freshman to come into a program like OU and expect those things. But that’s what he’s shown and we’re going to hold him accountable to that. I feel great about him being in our program.”