While much of the world has been focused on the terrible coronavirus pandemic that has swept around the globe, there has been very little room for any other news to fit into the social consciousness. Everything else of consequence has faded into the background.

That is except for one thing. Somehow the breakout Netflix hit ‘Tiger King: Murder, Mayhem and Madness’ has found a way to infiltrate social media without any type of old-school watercooler talk.

With much of the country either locked down or in self-isolation, the Tiger King has become a smash hit for Netflix.

Based in Oklahoma, the tagline for the documentary states “A zoo owner spirals out of control amid a cast of eccentric characters in this true murder-for-hire story from the underworld of big cat breeding.”

For anyone who has watched all seven episodes of the Tiger King, even that tag line doesn’t do it justice. The story of Joe Exotic (Joseph Maldonado-Passage) aka the Tiger King, is filled with comical moments, high drama, varying degrees of sexual relationships and the possibility of a tiger eating a human.

Exotic is currently serving a 22-year sentence in Grady County Jail after being convicted of 17 counts of animal abuse and two counts of murder-for-hire.

While Joe Exotic is the main character in the documentary, his world is full of people that come in and out of his life. Some of them make cameos in the film.

That includes JP Wilson, who is an entrepreneur, magician, photographer and restaurant owner in and around Oklahoma City. Outside of Oklahoma, he may be best well-known for showing off his magic skills at halftime of NBA games across the country under The Magic of JP Wilson.

Wilson has been friends with Joe Exotic since he was a freshman in high school. During that time he also toured with Exotic’s animal show and also helped him run for governor of Oklahoma.

Wilson watched the entire documentary and I wanted to get his unique insights on the film, the social media hysteria surrounding it and the man he still calls his friend.

So we had a little Q&A to discuss it all and a little more.

Michael Kinney: First of all, what was your overall impression of the Netflix documentary Tiger King?

JP Wilson: “I thought Tiger King was a fantastic documentary, very well put together and thoroughly planned. The documentary portrayed everyone that I knew in the series very true to life, granted I think that’s the only time I’ve ever seen John Finlay with his shirt off. That was weird. Joe truly became larger than life at the park and customers would be just as excited to get a photo with Joe as they would be a tiger cub.”

Kinney: What part of the film stood out to you the most?

Wilson:  “The other zookeepers and owners from around the country were definitely a standout to me. I’ve heard of Doc Antle from Joe, never met the guy.  He seems very passionate about the animals and his zoo. His personal life, who knows if that is just sensationalized or true. And Carole Baskin, I’ve heard about her for years from Joe.  I’ve heard this story about her killing her husband and feeding him to tigers for as long as I can remember. It’s so funny to see everyone posting and talking about that now.”

Kinney: What did you think when you saw yourself for the first time in the Tiger King?

Wilson: “I had a very brief cameo in the first episode. The crew did capture several hours of footage of me for the documentary. Including me driving around Oklahoma City in my Porsche with Bono, my Savannah cat.  I’m not sure how much of it truly applied to the ending documentary that’s now on Netflix. I don’t believe I fit the type of many other people in the show, and I take that as a compliment. I did first meet Joe performing magic shows. I did magic in his theatre shows while he would display animals and educate the public about them.  Great show, sometimes very long as well. A few shows would last over three hours because Joe had so many animals to show. There was also a country singer in the show whose name was Ashley Wheeler. We would sell out theaters across Oklahoma and people loved the show.”

Kinney: Are you surprised by the reaction of the Tiger King around the country?

Wilson: “I am very shocked and surprised at the amount of attention this documentary has received. I never would have guessed that there would be this type of reaction to a documentary about Joe Exotic.  When he ran for governor, I had his campaign materials at my restaurant in Moore. We were an official campaign merchandise pick up location. There were some excited people to pick up shirts, but I always had an excess of them. Many people chose not to take one. But now, everyone I know is texting me and wanting one of his campaign shirts. Everywhere you turn there is a Joe Exotic meme for every situation. I’m sure he is thrilled to be such a household name now.”

Kinney: What do you think has drawn people to not only watch the film but become enthralled in the life of Joe Exotic?

Wilson: “I think so many people from outside Oklahoma are drawn to this because of how crazy the story is.  Every twist and turn is outdone just a few minutes later. And just when you think you’ve seen it all, there is something crazier just around the corner.  I also think so many people in Oklahoma are surprised by it because after seeing so much about Joe Exotic over the years they are now seeing people in the Big Cat industry that make Joe look like the normal one of the group. Shocking to Oklahomans, I’m sure.”

Kinney: How did you come to know Joe Exotic?

Wilson: “I first met Joe exotic while doing a magic show in Norman. He had supplied a tiger for the show. While there I began talking to him and he wanted to do his own theater shows and a few months later they were on the road and performing shows. I was only 14 or 15 at the time. A freshman in high school. So I would have to leave school early on a Friday So that my dad could drive me to the show along with all of my props. We would do a Friday night show and most of the time also a Saturday afternoon and Saturday evening show. If it had been very popular, they were times we would stay and also perform an encore show Sunday as well. Joe was always a showman and he did even sing one or two songs during the show as well.”

Kinney: What there a side to Joe Exotic that maybe wasn’t shown in the documentary?

Wilson: “Outside of the show he was always willing to help the community. He would host school groups at the park and participate in nonprofit work as well. My neighbor was in the OU Children’s Hospital for a very long time back in 2012 and to help make one of the days there a little better for him, Joe brought a tiger up to the hospital so that Tyler could come to meet her and take a photo with her. Right one the front steps of the hospital. It was a sight to see.  Joe would continuously donate playtimes, tickets, group tours for nonprofit and charity events to auction off as well to help raise funds for their own causes. I had picnics at the park several times a year for friends and customers of mine.  We would come down after the park had closed and brought food to cook for everyone, including Joe and his staff. Joe would personally give everyone a tour of the park and also tell them stories about each animal and where they were rescued from or how they were rescued as well. When I first became friends with Joe, the park was primarily for rescue animals that he would take in. These are animals that had been abused by roadside circuses, had been purchased by people who had no idea what they were doing. For example, there was one monkey in the park that a person had bought and kept inside of a closet for its entire life. Joe rescued the monkey and gave him a fantastic place to live to finish out the rest of his life. Another example was a bear who would move around to look like he was dancing.  It was a bear he had rescued from a roadside circus. The bear had been trained on hot coals to move his feet around to look like he was dancing. The park was filled with stories like this. Animals that he had rescued from terrible situations and supplied them with a place to live.  In my opinion, this is why Joe was forced into making breeding a normal practice. He needed money to support how large the park had grown. Joe’s mall tours and educational shows had been great resources to raise funds for the park. As Carole Baskin began to create trouble for Joe and the places he would perform, Joe had to find new ways to create funds to support all of the animals at the park.”

Kinney: Does the Tiger King give an accurate portrayal of all the characters involved?

Wilson: “From my experiences that I know of, Tiger King did a great job of focusing on many truths that existed and showing them for the world to see. I don’t know all of the characters or everything that happened so I can’t say everything is factual. But I didn’t see anything misrepresented that I knew to be wrong personally. I wish they had shown a little more about Joe from the beginning because there was a clear progression from the Joe 16 years ago into the Joe today.  The park grew, his performances grew, the park became more popular. Joe became more popular, on and on. From the very beginning, Joe was very informative and compassionate about the animals. He worked very hard and long hours to ensure the animals had a great life.”

Kinney: What do you hope people who watch the film get out of it the most?

Wilson: “I hope this brings awareness that there are many people in the big cat industry who do abuse animals and are hypocrites.  But just because some are, not everyone is.  In all of my experiences with Joe, I never witnessed or saw anything happen detrimental to the animals.  He was always on the lookout for the safety and well-being of all animals in his park.” 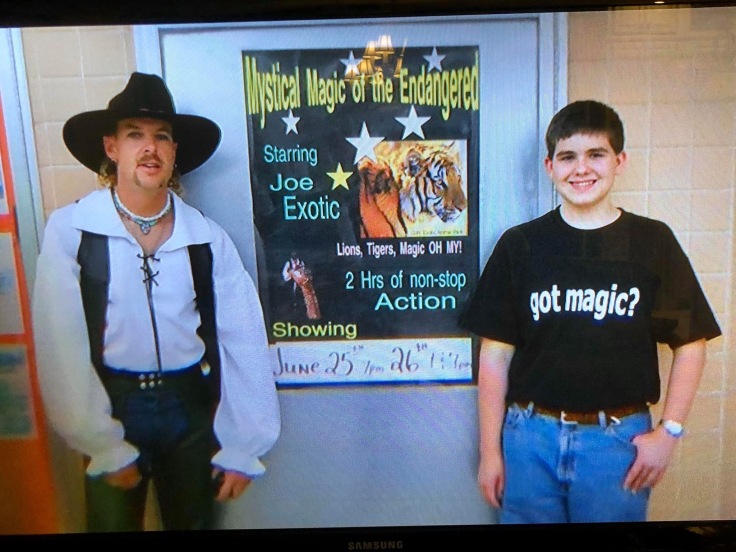 One thought on “Friend of Joe Exotic is surprised by ‘Tiger King’ mania, but says it’s a true story”