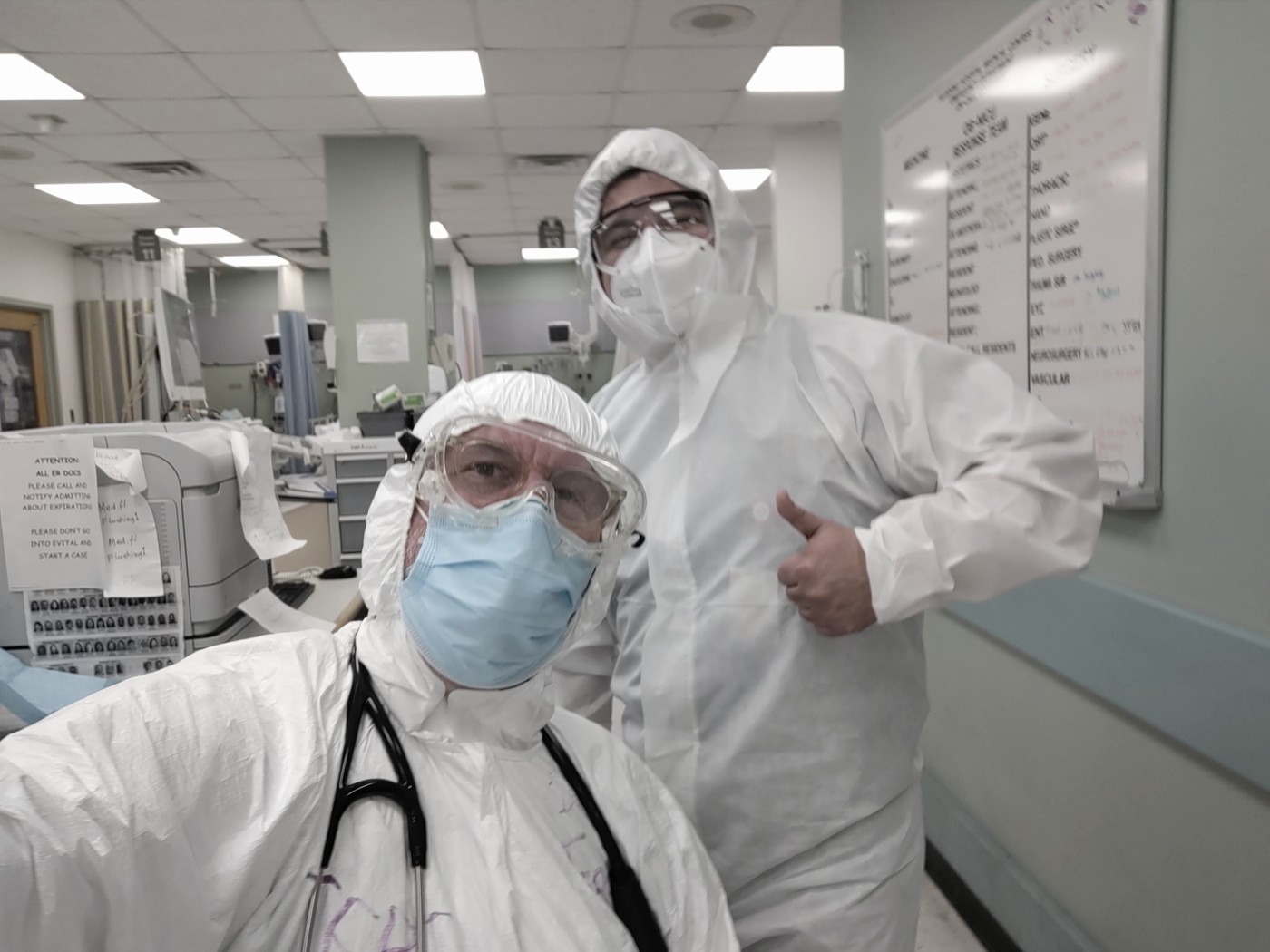 Dr. Terry Jodrie has seen some bad situations. In his position as a Development Specialist with the Global Emergency Medicine Initiative (GEMINI), he’s called upon to provide assistance to programs throughout the world to enhance their ability to treat emergency patients.

Jodrie, a board certified emergency physician, has had to jump into hotspots in the battle against the COVID-19 pandemic. In doing so, he has a distinct point of view of where it started to get out of control. That includes the unwillingness or inability for those in charge to be bluntly honest about the serious ramifications of what can happen to those who get COVID-19.

“We have failed to appropriately tell the population what a horrible experience it is to have COVID that leads to death,” Jodrie said. “If you are dying of COVID, here’s what happens. You show up at a hospital, your family never sees you again. And as you go towards your death, okay? You are surrounded only by people in space suits who might want to attend to your needs as you’re dying, but they’re so busy trying to keep you and others from not dying, that they might not attend to your needs. And your family will not be there. You will die alone in a hospital, surrounded by people in space suits.”

That is why the current debate over whether or not to wear masks has dumbfounded Jodrie. As someone who has been on the front lines of this pandemic since it first began to erupt, he as seen just how bad it can get.

“My personal experience is I started every shift, every single shift coming and going, walking past refrigerator trucks that held the dead bodies,” Jodrie said. “They are patients I treated before. The day before. If that doesn’t make the point, I don’t know what would.”

“Here’s the deal. As human beings when the pain gets enough, we change,” Jodrie said. “When we are faced with it and the pain is bad enough, we change. And until that, we may or may not. Man, I’m sorry you asked me that question, but that’s my answer.”

The reason Jodrie could be called pessimistic about the chances the country gets past the coronavirus pandemic any soon is not because of what he has witnessed in the hospitals, but the overall response from the people and their lawmakers.

“So we’re in a dangerous place where the virus is taking off and many, many people are not taking it seriously,” Jodrie said. “And I’m not talking about that subset that’s five percent, that conspiracy theorists kind of people who think it’s a hoax. I’m talking about in the population, generally, that just feel like, ‘We’ve had enough of this. We’re going to plow through it and we’re not going to do the right thing no matter what science says, because we’re not getting any leadership to tell us otherwise.’”

When Jodrie says the country is in a dangerous place, he doesn’t mean in the fall or winter. With the numbers mounting across the states, he won’t sugar coat the direction he thinks the nation is heading.

“We’re going to see really quick how bad this can get. I mean, you’re talking, we passed 1,000 deaths a day in this country, we have hotspots where the virus is just taking off and there’s very little political will to do anything but pretend like it’s going to go away,” Jodrie said. “We have people talking about opening schools without plans, opening the economy without an appropriate mandate that people behave in a way that will decrease the viral load in the community.”

After most states instituted some type of shutdown in March, the daily number of coronavirus cases began to slow down. But as fears over the economy crumbling began to arise, and pressure from the federal government ramped up, governors started reopening their states in May.

Since then, Jodrie has witnessed the country dissolve into a constant debate between the health of the society and personal freedoms. In simpler terms, whether to wear masks or not.

Once again, Jodrie puts part of the blame on messaging and communication.

“I think we, as medical professionals have failed. Because we try and make it about me, about what’s good for me. You wear a mask, and we’ve been saying, we wear a mask. We protect you,” Jodrie said. “But what we haven’t actually made people understand is if everybody wears a mask, what it does is it decreases the viral load in the community. It’s not about you and the person next to you. It’s about the community. If we can get the viral load down to a manageable level, then we can actually cast and do contact tracing.”

Jodrie would like to see a much stronger emphasis put behind mandates on facial coverings. Not just at the state level, but the federal government as well.

Jodrie doesn’t seem to be alone. In a recent Harvard CAPS/Harris poll that was released in The Hill, 79 percent of respondents said they would support such a national mandate on face coverings. In the same poll, 70 percent said they were in favor of local governments imposing fees on individuals who do not wear masks.

“We know that if Americans would just wear a mask and take it so serious, then we would really change our course,” said Dr. Scott Michener, the Chief Medical Officer at Comanche County Memorial Hospital. “And I don’t know why we’re not doing it. It completely flabbergasts me, why we’re not doing it. But, I’m a surgeon, I wear a mask a lot in the operating room. Wearing a mask is nothing to me. It just seems like a small sacrifice to make to get by.”

As of Aug. 15, there were more than 5.4 million cases of the coronavirus in the United States. Of those, 2.8 million have recovered while more than 171,000 have ended in death.

Getting people to realize the severity of the pandemic has been one of the biggest issues for the medical community.

“Somewhere along the way, it became political instead of public health,” Michener said. “And I don’t really know where that transition happened or why that transition happened, but you have the leadership at the highest level of our country kind of throwing biology aside and not understanding the science. And so I guess maybe part of it is messaging, part of it is political, part of it is the entitlement of the American people that, “Don’t tell me what to do,” the civil liberties argument. It’s probably multifactorial.”

Jodrie admits when talk of the coronavirus first began to spread, he saw it much differently. Even someone with his years of experience underestimated just how serious this pandemic was going to become.

“None of us got this right. Me, you, nobody,” Jodrie said. “At the beginning, I remember saying in March, ‘Okay, this is not going to be a big deal.’ Holy smokes, how wrong I was.”

When Jodrie was sent to New York for the first time to help with the overload of COVID-19 patients that had crippled the health care system. That is when the real face of the disease began to show itself.

“Well, it was a horror show,” Jodrie said. “Arriving Queens, New York, where people were presenting in advanced stages of disease requiring advanced airway management and ventilatory management. And yeah, it seemed like everyone was sick. We were caught off guard was the perfect way to state it. And I will supplement that by saying that I don’t think anybody could have predicted how bad that would have been.”

While Jodrie may not be overly optimistic that the country can stop the spikes and surges and begin to turn the pandemic around, he says at some point people will start to do what is in their best interest. But he says it make take a heavy dose of reality to prod them into protecting themselves and those around them.

“We are at war with the virus. And we, as a people have been at war before. When we were in World War II, you would do metal drives, rubber drives,” Jodrie said. “And here we are now, we we’re at war and the very ability with which people are complying with the war effort is really just dismal.

“So if you think we’re at war,” Jodrie continued, “you need to do the things that we do at war, including sacrifices, wearing the mask, social distancing, washing your hands, etc. I mean it’s just really that simple.”