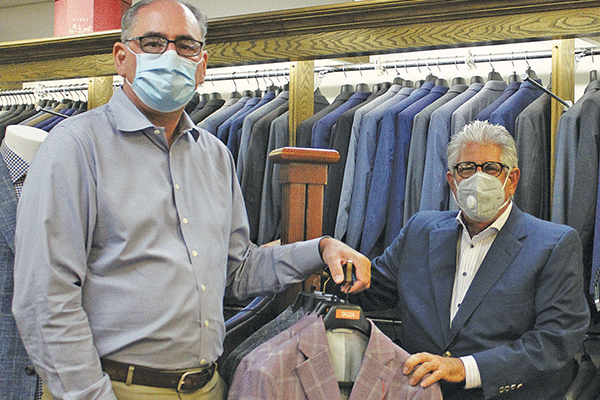 Established in 1954, Edward’s has withstood recessions, downturns in the economy and fashion trends such as leisure suits to become known as one of the premier shops for men’s suits across southwest Oklahoma.

However, 2020 has brought something different to Edward’s doorsteps. A global pandemic that has not only altered how business is done, but could change business going forward.

“This COVID thing is a different animal,” said Eddie Hamra, the owner of Edward’s Men’s Wear. “It doesn’t matter what business you’re in, this has a different effect than anything we’ve ever run across.”

Like almost every other business in Lawton and southwest Oklahoma, Edward’s Men’s Wear shut its doors in March when city and state governments mandated nonessential business close down. Hamra was able to open his shop back up on April 27 when the city of Lawton proclaimed clothing stores were essential.

“I said ‘Stan, I can’t fit someone six feet away. You and the Governor, unfortunately, did not put a lot of good practice into this before you all okayed this,’” Hamra said.

“There are half a dozen stores in this whole state that are like mine. We make our living with a tape measure and you cannot fit somebody from six feet. It’s not possible.”

There has been a steady decline in business as customers are afraid to venture back into stores.

Edward’s does not just sell off-the-rack merchandise, it specializes in fitting the suit to the customers for the perfect look. That means getting up close and personal at times. Hamra says he and his employees take all the precautions they can. That includes wearing a mask whenever shoppers enter the store.

“I’m good. Hamra said. “I’m really good. And I can probably nail 75 percent of the people walking in just by looking atthem. But…our job is to give you the best-fitting suit you’ve ever had.”

Hamra says the pandemic has also forced him to change how he stocks his shop. As other markets across the country now have limited items to sell, Edward’s has cut down on the variety of suits they offer.

“We have to buy accordingly and still stay fresh on our merchandise and current in our styles,” he said. “That will never change.”

Hamra is not the only haberdashery to feel the effects of the economic downturn and pandemic.

Over the past six months, industry staples such as Brooks Brothers, J. Crew, Men’s Wearhouse, Neiman Marcus, Lord & Taylor and Jos. A. Bank has gone out of business or filed bankruptcy.

Hamra credits the governmental help he received as a big reason he has been able to keep his doors open.

“We all caught such a fantastic break when they gave us the national PPP program and individual income that they gave everybody,” Hamra said. “I can promise you, that’s one reason I’ve stayed afloat right now, and the fact that we have cut back some of our buying.”

Currently, Hamra says business for Edward’s has lacked consistency. In the 66 years it has been open, this has never been a problem before. He pointed to the 1980s oil boom-bust cycle as a prime example. When men and women were making and losing fortunes on a daily basis, Edward’s was able to keep its numbers up.

Since the pandemic has forced so many employees to work from home, the business suit has become a sort of an afterthought. But even back in March, Hamra said a return to normalcy was a long way off. At that time, he believed it would take a year. Seven months later, he still believes it going to take a year from now.

“Until there’s a cure, nobody wants to venture out, and everybody wants to stay away,” said Hamra. “When they find the cure, that’s going to be the start to our recovery, in my opinion.”