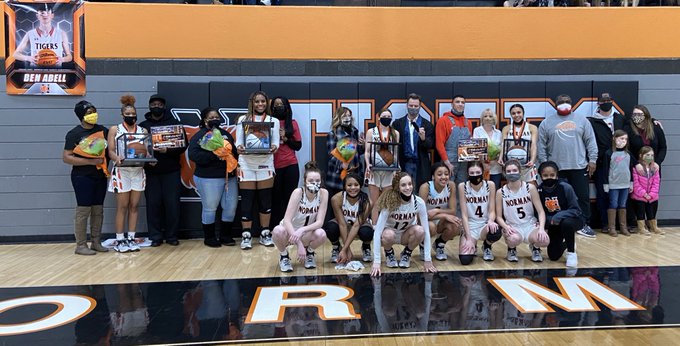 A video has been released on social media seemingly showing announcers at a high school basketball game allegedly using racially disparaging remarks to describe players from one of the teams.

In it, announcers on the website NFHS (National Federation of High School) Network can be heard taking offense to watching players from Norman High taking a knee during the national anthem.

Parks, who has a daughter who plays on the Norman High squad, was stunned by what he heard.

“Initially when I heard the screw them, I hope they lose kind of stuff, coming from supposedly unbiased announcers, I was a little disappointed. But I don’t think I was disturbed,” Parks said. “I think where I was really perturbed was the whole ‘Fu***ng Ni**ers thing. When you hear that kind of statement coming from those types of individuals and considering where we are as a society right now, it only reemphasizes that there is a lot of work to be done. We wouldn’t make a big deal about this if that’s not said. But because I do have a child that’s playing on the team, it’s a little more personal to me.”

One of the announcers has been identified as Scott Sapulpa, the head foot coach at Hulbert High. According to the Hulbert Public School District, he was not the one who made the racist comments. However, he has been placed on administrative leave and “will not be returning to school.”

“While it has been reported incorrectly that our employee was the announcer who used racist language,” said Hulbert Superintendent John Choate in a statement, “our employee should have stood up for the students and condemned the racist langue from the other announcer and the hate and the intolerance it represents.”

The other announcer, Matt Rowan, released a statement Friday evening and blamed part of his comments on a medical condition.

“I will state I suffer from Type I diabetes and during the game my sugar was spiking,” Rowan’s statement read. “While not excusing my remarks, it is not unusual that when my sugar spikes that I become disoriented and often say things that are not appropriate as well as hurtful. I do not believe I would have made such horrible statements absent my sugar spiking.”

Rowan went on to state that he is not a racist, but can not explain why he made the comments.

Parks pointed out that the Norman High squad is made of players from different races and ethnicities. But, obviously, he says, the announcers were upset with only certain players.

“That is an internal belief that those individuals have,” Parks said. “And it’s obviously directed toward black folks even though you have white folks on the team.”

OSSAA Executive director David Jackson said his organization has been made aware of the comments made and are investigation the situation.

“On behalf of the NFHS Network and the OSSAA, we sincerely apologize that this happened at one of our events. While we are currently investigating the incident, this crew will not be doing any more games for the remainder of our championships,” Jackson said. “This kind of behavior will never be tolerated by anyone representing the NFHS or OSSAA. State tournament playoffs are a special time for our schools, their students, and their communitites, and anything that is counter-productive to education-based activities will be addressed immediately and appropriately. We will make further comments as we finish our investigation.”

Christy Washington learned of the video from her daughter Kelbie, who is a senior guard on the team and has committed to play at Oklahoma.

“I was shocked and saddened,” Washington said. “My heart just broke. She called and told us they had heard it. Just listening to the sadness in her voice, she was mad and enraged. She was like, ‘This is why we kneel.’ The irony of it all.”

“Last night during the Norman High School girls’ basketball game versus Midwest City in the Oklahoma 6A State Basketball Tournament, National Federation of High School (NFHS) Network announcers on a live stream broadcast made racist and hateful comments targeted at our Norman High student athletes. The announcers were contracted by OSSAA for the state tournament,” Migliorino said. “We condemn and will not tolerate the disgusting words and attitudes of these announcers. This type of hate speech has no place in our society and we are outraged that it would be directed at any human being, and particularly at our students.  We fully support our students’ right to freedom of expression and our immediate focus is to support these girls and their coaches and families, particularly our Black students and coaching staff. It is tragic that the hard work and skill of this team is being overshadowed by the vile, malignant words of these individuals. We will do everything in our power to support and uplift our team and everyone affected by this incident.”

Norman High is ranked No. 1 in Class 6A and ranked No. 18 nationally. They moved to 18-0 Friday evening with a 53-50 win over Tulsa Union in the semifinals of the state tournament. That is where Parks wants his players to keep their focus and not let the video become a distraction.

“They know that that stuff is out there,” Parks said. “The way we are focused on it right now, their job isn’t to focus on that. That’s something the adults will handle. Their focus is on winning a state championship.”

The NFHS released a statement condemning the announcers.

“We were sickened by the comments made last night at the start of the NFHS Network’s broadcast of the OSSAA girls basketball game between Norman High School and Midwest City High School. The thoughts expressed in no way represent the NFHS Network and we are outraged that they found their way into our production,” the statement read. “The NFHS Network firmly condemns racism, hate and discrimination, and there is no room for this in high school sports or anywhere. We sincerely apologize to the students, their families and the entire community for having such ignorant comments expressed during the broadcast. We are aggressively investigating the incident and will ensure that any individuals responsible will have no relationship with the NFHS Network moving forward.”

Washington believes the announcers should not be allowed to cover any more games at the tournament.

Parks said he really isn’t interested in what the NFHS has to say about the video and their announcers.

“As far as what comes from this, people just need to know it’s still out there,” Parks said. “There is still a lot of work to do. But ultimately, as far as that particular broadcaster, he shouldn’t have a job anywhere anytime soon as it relates to broadcasting.”

Since the release of the video, school districts around the state have been voicing their support of the Norman High girls. The Moore School District went even farther by terminating its contract with NFHS.

“We will select a different vendor to meet our athletic event streaming services needs. We condemn the racist and vile comments made by their announcers last night prior to the Oklahoma 6A Basketball Tournament girls’ game of Norman and Midwest City,” said Moore Schools Superintendent Dr. Robert Romines. “Hate speech has no place in our schools and society. We will not sit idly by and “hope change occurs” – we have the ability to make change happen.”