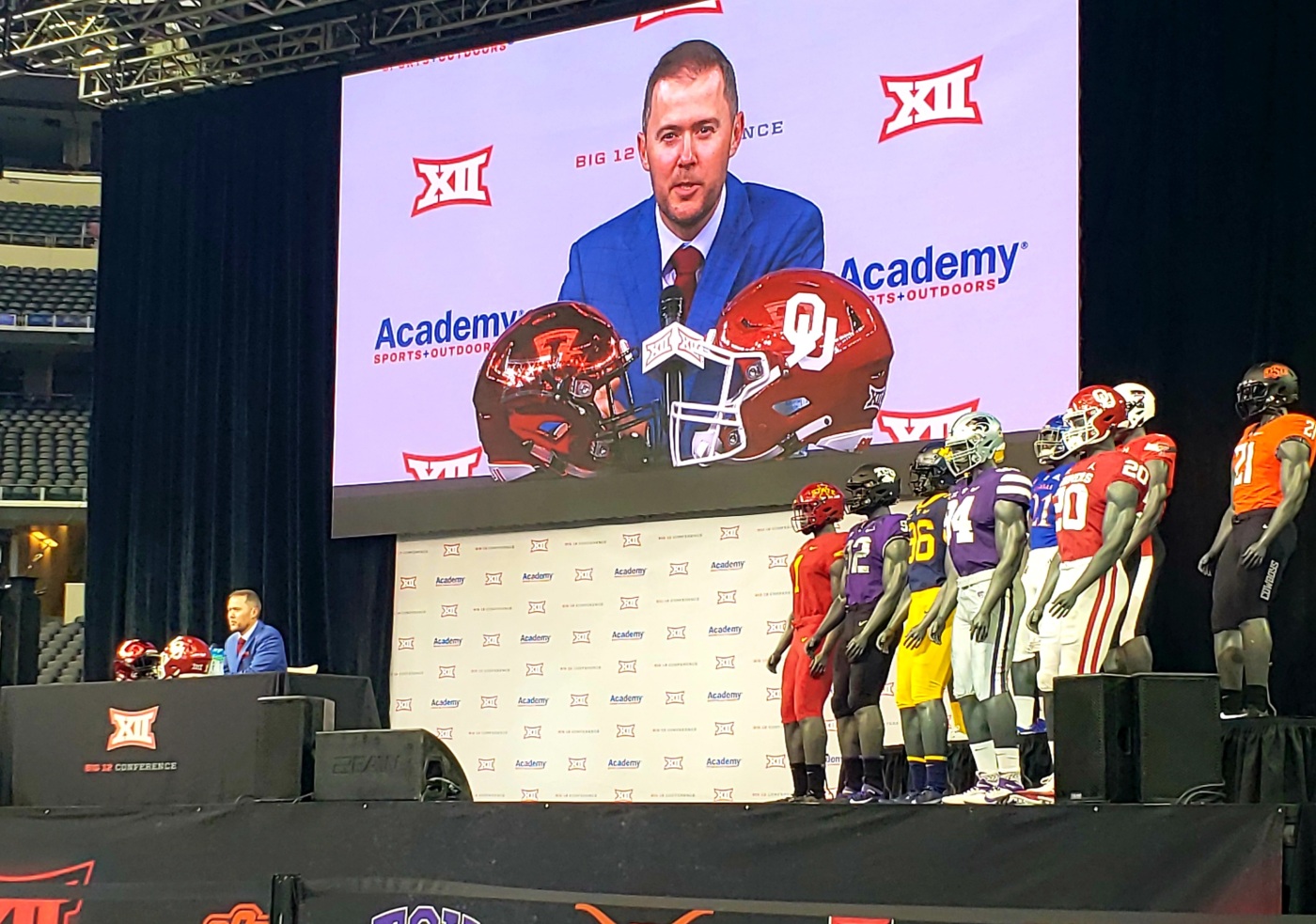 ARLINGTON– In the seven years of the College Football Playoffs, the Big 12 Conference has been present in three of them. However, also unfortunately for the conference, they all belong to one program, Oklahoma.

While teams such as Baylor, Oklahoma State and TCU have come close to earning a spot in the four-team playoff, they have been on the outside looking in.

In fact, four teams (Alabama, Clemson, Ohio State and Oklahoma) have accounted for 71 percent of the total spots earned since 2015.

Because of that, the expansion CFP format was a hot topic of discussion during the annual Big 12 Football Media Days July 14-15 at AT&T Stadium in Arlington.

“I think the expansion that’s been proposed is a great start,” Oklahoma coach Lincoln Riley said. “ “I commend the committee that put it together because you’ve got to put yourself out there. You’ve got to starts somewhere. And I think their proposal was really good in alot of ways. I think it addressed, you know, maintaining the Bowls which are so important to the history of our game that I hope we never turn our back on.”

Currently, the CFP is comprised of two semifinal games and then a national championship. A committee ranks the teams and the final four advance to the playoffs.

However, after much debate, the CFP officials finally decided earlier this year to have serious talks about changing the format of the playoffs. One of the biggest points of interest is adding more teams.

The College Football Playoff Working Group (a four-person subgroup of the CFP management committee) proposed jumping all the way up to 12 teams.

Big 12 Commissioner Bob Bowlsby was one of the committee members of the CFP Working Group. While he wouldn’t come out and say it would definitely benefit his conference, the numbers seem to show it will.

“I think moving forward, we haven’t had a year in the Big 12 in the playoff era where our champion didn’t finish in a position where it was one of the top-six rated champions in college football, in the poll,” Bowlsby said. “So I think our chances of –while it’s not automatic, I think our chances of having our champion and perhaps one other in the event are pretty good. I’m willing to live with those. Is it a certainty? No, it’s not. But it’s a risk that I think is an enhancement for us.”

While the proposal hasn’t been accepted yet, it was something many of the coaches seemed to be in favor of seeing come to fruition, but still have questions on the details.

“There’s still work to be done and questions to be answered,” Riley said. “The obvious one of how many games you want to play in a season is certainly one. Is 12 too many? Certainly, some of those things are up for debate. I think it was a great proposal and something we can all work off of to make the system better.”

The system has been a money-maker for the participating teams and the conferences they represent. In 2019-2020, the CFP distributed more than $475 million in revenue. Each of the Power 5 conferences received $66 million.

Some analysts believe those numbers could jump to almost $2 billion with a 12-team format. That would mean at least six more games being played.

While there is a strong push to make the change, it is still up to the universities presidents and chancellors to make the final decision. According to CFP executive director Bill Hancock, with five years remaining on the current agreement, it may be the status quo going forward.

“A lot of things are still to be worked out,” Hancock said. “It certainly won’t start this year or next year if [the proposal] does go through. But we don’t know when it might. The CFP could stay at four teams. Until the presidents and chancellors decide, this will remain just a proposal.”