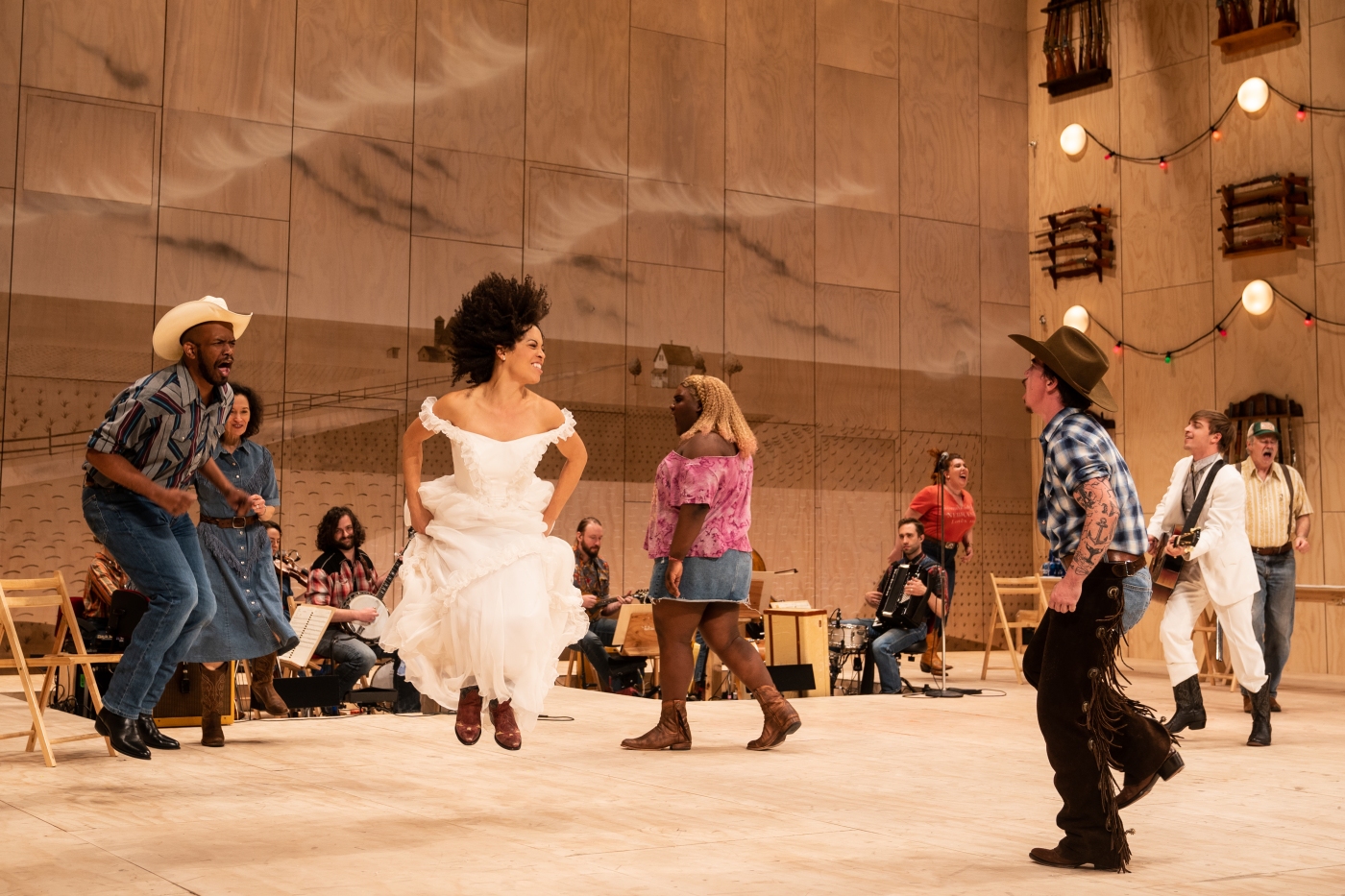 At some point in my life, I have seen the Broadway Musical turned feature film, “OKLAHOMA!” I’m not sure if I saw it during ninth grade Oklahoma History class or watching TV late at night and it just popped on.

While I know I have seen it, I literally remember nothing about it. It made no impression on me, except for the theme song which was ingrained into every Oklahoman’s head for the past 60 years.

Despite that, when I went to the opening night of “OKLAHOMA!” for the OKC Broadway at the Oklahoma City Civic Center, I assumed it would all come back to me at some point. I couldn’t have been further from the truth.

While it is still titled Rodgers & Hammerstein’s OKLAHOMA!, this version has what can be considered a different tone and theme altogether. For those who grew up on the original, this new version could definitely feel like an entirely new product. That includes a 20-minute interpretive dance routine from Gabrielle Hamilton while wearing a Dream Baby Dream shirt. (I found out later the original musical in 1943 had one as well).

OKLAHOMA! is set in 1906, a year before the territory would become the 46th state in the union. The residents of a small, sleepy town feel big things are coming but still must deal with the everyday struggles of life in the west at the turn of the century.

But after you strip away the music, the dancing, the sexual innuendos, the jokes and costumes, the premise of “OKLAHOMA!” is an age-old conundrum that has been the basis of countless movies, books and songs. Two men love the same woman, and she must choose between them.

In this case, it is Laurey Williams (Sasha Hutchings) who must choose between wholesome cowboy Curly McLain (Sean Grandillo) and brooding ranch hand Jud Fry (Christopher Bannon). Their relations are intense and unhealthy at best and foreshadow a dark ending.

However, there is also a secondary love story in which Ado Annie (SIS) has feelings for Will Parker (Hennessy Winkler) and Ali Hakim (Beni Mirman). She must decide who she wants to marry even if one of her suitors just wants to “take her to the end of world”, which he says is a hotel room in the next town over.

It is from this triangle that the humor in the musical stems from. Ali, who is also known as the Persian Peddler, had no interest in getting married and was content to play the field as he traveled from town to town. He seemed to have 90 percent of the funny lines and was my favorite character by far.

It also showed how women were viewed as property and their choices in life were limited. Ado’s father said she could only marry Will if he had $50 to give him.

However, claiming to not have changed a word in the play, director Daniel Fish has used this 21st-century version of the musical to take on several different hot-button topics that are prevalent today. That includes gun violence, which plays a major part in the final act and the towns folk having to make some hard choices.

The diversity of the cast added to the experience as well. Half the cast were people of color, including those in leading roles.

Along with Mirman, Hutchings and Grandillo were strong and their performances stood out.

The audience gave the loudest ovation for SIS after singing “I Just Can’t say No.” But “What a Beautiful Mornin” and “Kansas City” received strong reactions.

Overall, while at times confused by what was taking place on stage and the story itself, I was still entertained. Including intermission, it lasted almost three hours, but it kept me focused, even if some of that was just trying to figure out what was going on.

More than anything, seeing this “OKLAHOMA!” has me wanting to go back and see the original to see if it stands the test of the time.

The 2021-22 tour marks the first time a First-Class Equity production of OKLAHOMA! has toured North America in more than 40 years. There is a large swath of residents who have never seen the live version of the musical.

Yet, when the title song was played, almost everyone in the theater sang along at the end of the night. That will never change.

On opening nigh when audience members left the theater, some were cheering and clapping. Others talked loudly among themselves about how they were offended and upset. A few more were confused and asking lots of questions of each other.

But the most important part is they were discussing it. In the end, that is what art should do.