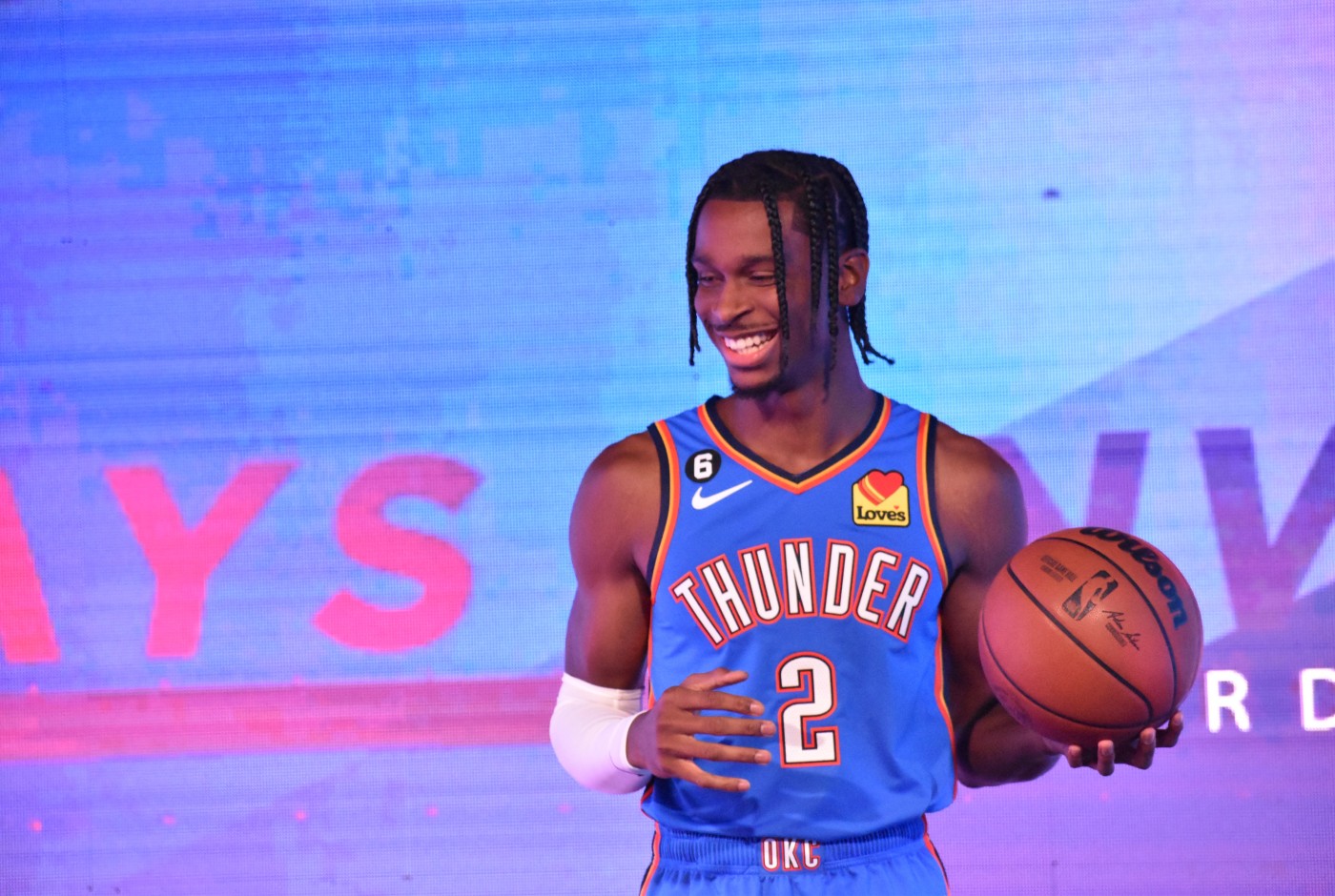 OKLAHOMA CITY- Heading into his fifth year, Shai Gilgeous-Alexander had hoped to be talking about a variety of different things when he attended media Monday. From looking toward leading the Oklahoma City Thunder back to relevance to his offseason activities that saw him expanding his brand, the 24-year was looking toward the future.

However, after suffering Grade 2 MCL sprain in his left knee right before training camp was set to start, Gilgeous-Alexander was having to answer questions about his health.

While the injury could keep him off the court for a few weeks, it is not deemed to have any long terms issues.

In the past two seasons, Gilgeous-Alexander averaged 24.2 points, 5.9 assists and 4.9 rebounds per game, despite playing in only 91 out of 154 possible games.

Yet, it was the advice Gilgeous-Alexander gave first-round pick Chet Holmgren that may have been the most important. Holmgren is going to miss his entire rookie season with a Lisfranc injury that he sustained during a summer Pro-Am League game.

“You really can just control what you can control,” Gilgeous-Alexander said. ‘It’s part of the game, unfortunately, and all you can do is try to be better afterward. His mindset and where he’s at now, I’m almost certain he’ll do so and be a better player after the injury.”

Holmgren was not at media day Monday, but almost every player and coach was asked about the No. 2 overall pick. All had nothing but positive words about 7-footer out of Gonzaga, whom they have only gotten to play with during a brief summer league stint.

“It obviously sucks to see anybody get hurt. Loved playing with him in the Summer League, built a good connection with him,” said Josh Giddey. “But I know what type of competitor he is, and he’s going to attack the rehab the way he should. Obviously would have loved to play with him, but that’s the way basketball goes sometimes.”

Even without Holmgren, the Thunder expect to be a better team than they were in 2021. Along with Gilgeous-Alexander and Giddey, Oklahoma City returns Lu Dort, Darius Bazley, Kenrich WIlliams and Tre Mann.

Dort signed a five-year deal worth $87.5 million in June and should ensure he will be a foundation for the Thunder in the years to come.

“Just looking back I feel like I came a long way, and my role to this team was not easy, but just really the main thing is obviously to get better and then to fit and help my teammates,” Dort said. “I feel like I can have a bigger role, just being a little more vocal. Just the fact that I went through some of the stuff that the young guys are going through right now, I feel like I can help them and talk to them and all that. But at the end of the day, I just feel like I’m ready to help this team be better and really help some of the guys.”

While Holmgren will not be available this year, Oklahoma City is expecting fellow 2022 first-round picks Jalen Williams and Jaylin Williams to provide depth and minutes to the team.

“It’s just a day-by-day thing. It’s really hard to give you a great answer on that with not even having a training camp,” Jalen Williams said. “I think the one thing that’s just going to be constant for me is kind of going out there and playing hard every game, something that I do every time anyway. Just going out there and competing. I’m looking forward to learning with the young group. I think that’s kind of a blessing for us that everybody is young so everybody is really eager to learn and kind of get better with each other, so I’m looking forward to that the most.”

Training camp officially starts Sept. 27. Oklahoma’s first preseason game is set for Oct. 3 when they head to Denver to take on the Nuggets.