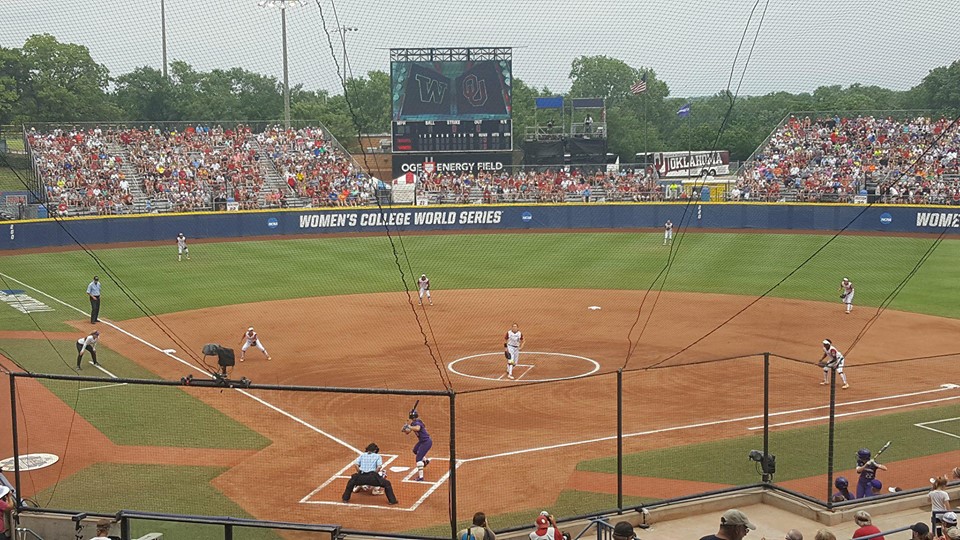 The loss dropped the Sooners down into the loser’s bracket, a situation they have not had to face in their previous two titles runs.

“Losing is never fun but I know how much fight our team has and how much heart that we have, and you know, I fully believe that this team can do anything,” OU All-American Paige Parker said. “And so just having so much faith and trust in each other, I know losing is not fun, but I know we’re going to come out strong our next game, and you know, bounce back from this.”

Oklahoma will face No. 8 seed Arizona State at 11 a.m. Saturday at USA Hall of Fame Stadium. If they win, they will take on the loser of Florida and UCLA at 6 p.m. Saturday.

If they lose either of those games, the season will be over for OU.

“We know we can bounce back. Like (coach Patty Gasso) said, this road, it’s not going to be easy,” OU’s Shay Knighten said. “Everyone’s gunning to win the national championship, and we just kind of put our heads together and said, you know what, this is not how we want to go out. We want to go out with everything that we have on the field and if they beat us, they beat us, but it’s not going to be because we didn’t try. We want to finish this strong and we want to get back to where we know we can be. It’s just having the will to fight and wanting what we want and not being afraid to go for it.”

UW’s  Gabbie Plain and Parker dueled throughout the most of the day. They limited the opposing offensive attacks to grounds outs and flyballs.

Despite that, Gasso pulled Parker in the fifth inning after allowing only three hits. She was replaced by Paige Lowary.

The Huskies still continued to work as they had put runners on second and third and Sis Bates at the plate. Bates hit a comeback to Lowary and Trysten Melhart took off from third. Lowary hesitated when throwing back to catcher Lea Wodach and Melhart slid underneath for the game’s first score.

Washington wasn’t done. Julia DePonte hit a double into shallow centerfield that brought in another run.

Lowary struck out the final two batters of the inning. But the damage had been done as UW led 2-0.

“Paige (Parker) was already up into the 70s with her pitch count. This is not anything uncommon. We’ve done it all the time. It was almost expected,” Gasso said. “So we stand behind the decision and I think both of these pitchers threw well. Quite honestly, our defense did not — the pitching staff did well enough to win, our defense and our hitters were not there today.”

The Huskies stayed on the attack in the sixth inning. With two runners on and no outs, Melhart laid down a perfect bunt to load the bases.

Gasso brought Parker back into the contest to get the Sooners out of the jam. After Kelly Burdick popped out, Taylor Van Zee flew out to left field. However, Nawai Kaupe had already taken two steps toward home and had to go back and tagged up, which prevented her from trying to score.

Bates bunted, but Parker got to it quickly and threw Kaupe out at home.

Trailing 2-0 in the sixth inning, the Sooners  Sydney Romero and Jocelyn Alo both singled with two outs.

UW coach Heather Tarr brought in pitcher Taran Alvelo to relieve Gabbie Plain.  Knighten then drilled a fly ball to right field that looked like it was going to fall in for a hit. But Melhart sprinted in from near the warning track to make a diving, juggling catch for the out. The play saved at least one run from scoring, possibly two.

“I would say that ranked in the top 10 of great catches I’ve ever made, and in that moment, I felt like I had it, I went for it, and I did catch it,” Melhart said. “When I got up, people were still running and I was like — I just threw it in all nonchalant and it worked out for us and they saw what I felt, so that was good.”

The Oklahoma bench was not happy with the call as  Gasso discussed the play with the officials in between innings.

“They said that it was a 100 percent clean catch right to me,” Gasso said. “That’s what the umpire said — like I’m 100 percent sure that she made the catch, and the transfer is when the ball came out. That was what I was told.”

According to NCAA Rules Secretary, Vickie Van Kleeck, the call was correct.

In the seventh Alvelo got the first two batters out before Nicole Mendes singled. Caleigh Clifton then singled to bring the game-winning run to the plate.

But Alvelo struck out Kylie Lundberg to end the game.